JoBoxers, who originate from Bristol, formed in 1982 from ex-members of Subway Sect. JoBoxers are comprised of Dig Wayne (vocals), Rob Marche (guitar), Dave Collard (keyboards), Chris Bostock (bass), and Sean McLusky (drums). Similar in style to Dexys Midnight Runners, both in look and music, The JoBoxers debut single ‘Boxerbeat’ reached #3 in the UK charts and the band were asked to tour with Madness on their ‘Rise and Fall’ tour. The 2nd single from the JoBoxers was ‘Just Got Lucky’ which once again hit the UK top 10 and also went into the Top 40 charts in the USA. ‘Like Gangbusters’ was the band’s 1983 debut LP which went straight into the UK Top 20 charts. 'Just Got Lucky' appeared in the movies ‘The 40-Year-Old Virgin’ and ‘Just My Luck’ while 'She's Got Sex' appeared on Samantha Fox's double-platinum selling album ‘Touch Me’. 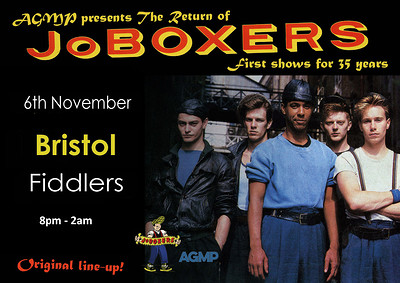