— Fiddlers
Back for another Xmas extravaganza of Folk Mayhem Sheelanagig take this opportunity to invite a bunch of friends for an evening of foot stom
time:20:00
price: Headfirst Tickets

Back for another Xmas extravaganza of Folk Mayhem Sheelanagig take this opportunity to invite a bunch of friends for an evening of foot stomping dance tunes. This year joining them will be fiery Scottish heavyweight quartet Rura and the exquisite vocal harmonies of Julu Irvine & Heg Brignall.

Sheelanagig for over a decade have brought their array of foot-stomping folk tunes to audiences across the globe. A quintet with a well-stocked armoury of stringed instruments – guitar, fiddle, double bass - added with the rhythmic energy of flute and drums and a bagful of joint-jumping tunes, these boys from the South-West England create a real dynamic which is inherent in both their furious dance medleys as well as their interestingly arranged original pieces.
Putting the groove into a selection of traditional and original European Folk music dating from the medieval times to present day, it’s difficult – nay, impossible – for your limbs to remain stationary when you’re within earshot of them in full flight. The fact that they often play with a knowing wink shouldn’t obscure their impeccable technique, and outstanding musicianship that raises the roof in every place they play.
In the last year they have toured France, Switzerland and Australia as well as busy summer festival season and an extensive UK tour. Catch them out on the road again in 2019, see website for tour dates.
‘A completely top night out.’ – Mike Harding, BBC Radio 2
http://sheelanagig.co.uk
www.youtube.com/watch?v=PHowQnN6oCs

RURA are a multi award-winning act, and one of Scotland’s most popular folk-based bands.
With three heralded albums – most recently, 2018’s lauded In Praise of Home, inspired by themes of belonging, heritage, and a sense of place – and extensive international touring, RURA are one of Scotland’s most powerful groups. Their compellingly fiery, rugged yet refined and progressive instrumentals on fiddle, Highland pipes, flute, guitar, keyboards and bodhran has placed them firmly at the forefront of 21st century Scottish folk.
In their near decade together, Jack Smedley, Steven Blake, David Foley and Adam Brown’s entrancing, euphoric live shows have been a main stage highlight of many of the world’s leading folk festivals – including Cambridge, Tønder, Woodford, Winnipeg, Vancouver and HebCelt, amongst countless others across more than 20 countries – whilst television audiences have been in their millions, including BBC1’s Hogmanay Live, broadcast live to the world over New Year 2016/2017 from Glasgow’s iconic Old Fruitmarket.
“One of the most exciting bands on the Scottish folk scene” (Songlines)
https://www.rura.co.uk
https://www.youtube.com/watch?time_continue=80&v=13xSBiZAH88

Combining storytelling, folklore and exquisite vocal harmonies, Julu Irvine & Heg Brignall fuse their spell-binding sounds to create this new duo. Their songs follow themes of love and loss; dreams and reflections and struggle and triumph against all odds. Taking inspiration from history, mythology and personal experience, Julu and Heg create evocative songs with a deeply moving and pure sound.
Both Julu and Heg have received praise and recognition for their songwriting work. Julu's debut EP Unrest burst onto the folk scene in 2017 receiving praise and glowing recognition across the UK including BBC radio exposure and a feature on the Trevor Kruger Folk Show. Following multiple EP releases and national UK tours performing the debut album Raising The Fires with theatrical folk outfit Heg & The Wolf Chorus, Heg has received EFDSS Funding, multiple nominations and awards, radio play across the country with glowing national press reviews with fRoots magazine describing the album as "highly accomplished and idiosyncratic".
The two now come together for the first time, using powerful songwriting, weaving stories and crisp vocal harmonies to create a beautiful, distinctive sound.
https://www.juluandheg.com

Doors Open 8pm
Music From 8.30pm
Due to venue policy the age restriction is 18+
This is a standing show with some unreserved limited view cabaret seating. 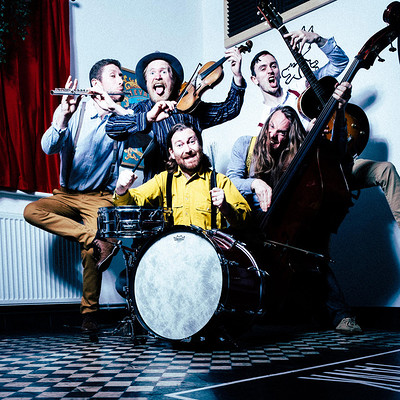