Worm Disco Club are very happy to announce we will be hosting the return of Joe Armon-Jones to Bristol.

Joe is back with all round positive reviews for his second full length album, Turn To Clear View, which is out now on Brownswood. Released just over a year after his debut album dropped and the recent album with Ezra Collective, Joe is proving that he has no desire to slow down his work rate and is concreting his position as one of the top players currently on the UK 'Jazz' scene.

It's a set of tracks that blur the lines between bass-heavy dub, modern club culture and his background as an accomplished standout performer in the modern jazz scene. Flourishes of hip-hop, R&B and P-funk help to make Joe's sound an accessible and highly enjoyable listen.

As well as playing many sold out shows in the UK, he's also been hailed as a 'must see' act at SWSX and also picked up the title for 'Session of the year' at the Worldwide FM awards. We can't wait to have Joe back again at Worm Disco Club.

Check these links out!

Joining us on support duties will be Ash Walker Music and his band the Ash Walker Experience. Making their Worm Disco Club debut, we are really looking forward to their performance. Ash' recent LP "Aquamarine" on Night Time Stories is a deep sea meditative voyage exploring a wide range of textures and influences such as J-Dilla, King Tubby, Quincy Jones, 4Hero and more...this is one for the deep heads. Something to make you think!

Check these links out! 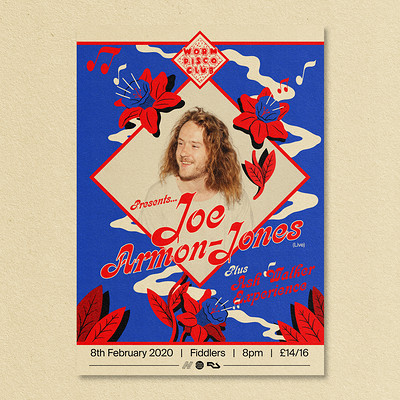