Two of the worlds leading saxophonists on tour together for the first time with a quartet that includes the brilliant John Edwards on Double Bass and the incredible Mark Sanders on Drums. This is a gig not to be missed.

PAUL DUNMALL - Paul is widely recognised as one of the most talented reed players on the International jazz/improvised music scene. Whether playing in small groups or big bands his musical sensitivity and imagination combined with a powerful sound drenched in both Jazz and Folk traditions make him one of the most distinctive improvisers playing today. He has performed with Alice Coltrane, Rashied Ali, Andrew Cyrille, Henry Grimes, Elton Dean, Evan Parker, Alan Skidmore, Keith Tippett, Mujician, Johnny Guitar Watson, Danny Thompson, LJCO, Chris Corsano, Paul Rogers, Andy Sheppard, Spirit Level and many more...

JOHN O'GALLAGHER is considered one of the most compelling alto saxophonist and composers at work today on the New York jazz scene. He is known for an innovative style which pushes the boundaries of jazz while rooted in it's tradition. He has worked with Joe Henderson (winning a Grammy for the recording Joe Henderson Big Band), Maria Schneider, Kenny Wheeler, Richie Beirach, Drew Gress, Ben Monder, Bob Belden, Hans Koller, Martin Speake and many more. In this country he best known for his Festival appearances with the Quartet of drummer, and fellow American, Jeff Williams and for his excellent albums on Whirlwind Records. John rejoined Jeff Williams Quartet on their UK tour in 2016 and in January this year his latest CD on Whirlwind - 'The John O'Gallagher Trio, Live in Brooklyn' was released to critical acclaim.

JOHN EDWARDS - A 'mainstay' on the London scene for over 25 years Edwards has played and recorded with Evan Parker, Kenny Wheeler, Derek Bailey, Lol Coxhil, Sunny Murray, Chris Corsano, Paul Dunmall, Elton Dean, Louis Moholo, Gerd Dudek, Steve Noble, Roger Turner Liam Noble and many more.
"When John Edwards plays his double bass, he is extraordinarily engaging. He plucks, tweaks, bows, hits and hums aloud. So engrossed is he that it is difficult to look away" - All About Jazz (Sammy Stein)

"Drummer Mark Sanders is a gifted player capable of seamless movement between free-rhythms and propulsive swing". - The Guardian, (John Fordham) 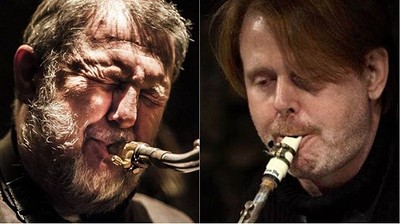