We're really excited and happy to announce the return of Fumaça Preta!!

The Amsterdam based psychedelic fuzz group are back with their third studio album, released on Bristol imprint - Stolen Body Records after having moved from Soundway.

"A genre busting, gut quivering, psychotropic, metallurgic Goliath drawing from a vast range of unknown genres such as Fê Fê Fê, Dem Bow and Merengada, crushed into their very own Tropical Psych Punk Freakout signature style. The band even indulge their collective life long love of classic HipHop as well as their essential dabbling in a parallel fuzz dimension."

They are like Hunter S Thompson in musical form. Acid laced Haribo Tangfastics! - Check out the attached video!!

Those who follow us at WDC will remember we first hosted Fumaça back in 2016 at the PRSC space on Jamaica Street. This time we will be returning to The Jam Jar Bristol (the scene of our epic Comet Is Comet gig) to bring you a night of psychedelic insanity(!) with all the usual WDC fun added on.

We will have DJs from Stolen Body Records warming up for the band and the Worm Disco Club DJ crew playing dancing sounds to keep you moving afterwards.

The Jam Jar is a intimate space, and there are only limited tickets available for this so moooove if you wanna guarantee entry.

It's a beautiful little venue if you haven't been before with bags of character, mixed sex toilets and a comprehensive and cheap bar list! 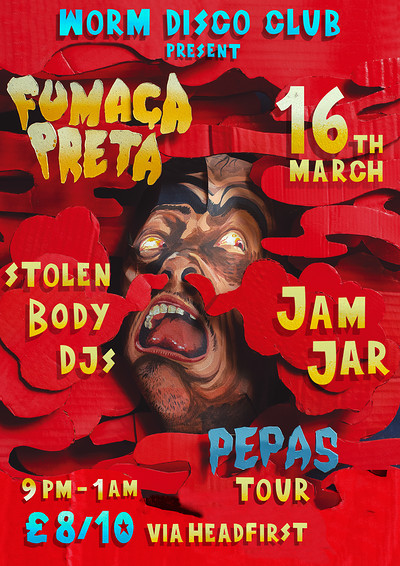