Party no. 8 falls on International Women's Day so we've got a line up featuring some of our favourite female DJs for you. From San Francisco there's Lucy Stoner, playing only her 2nd ever UK show and warming up for a set at Bangface the following weekend , repping Leeds is Jameela, anyone that know the Bristol Jungle scene should be familiar with Lady Lox talent and there's also Miss Kendal, coming over from Derby.

LUCY STONER (DoesitBANG? and 5lowershop) - 2 hours
(soundcloud.com/lucystoner /
https://www.instagram.com/lucystonerbangs)
Lucy Stoner has been a part of the underground American rave scene for nearly two decades, throwing parties, making music and DJing with crews in Los Angeles and the Bay Area. Co-founder of the DoesitBANG? crew and long-time member of 5lowershop Soundsystem, Lucy Stoner is known for her “Aggressive Booty Music” consisting of heavy bass, broken beats, donks, airhorns, acid, and amens with a side of rave stabs and a healthy dose of all things booty. Her music has been featured on Ireland's Solid Sound radio, London's Threads Radio and the bay area's SutroFM. No butt is safe when Lucy Stoner’s on the decks.

JAMEELA (SlutDrop) - 2 hours
( soundcloud.com/akajameela / https://www.facebook.com/jameeelaaa / https://www.facebook.com/slutdropleeds)
A self-described ADH-DJ, JAMEELA has trouble settling into a clearly-defined musical box. Having cut her teeth playing at some of the finest nights the northern underground club scene has to offer – Slut Drop, SKIN, and Putting In Werk, to name a few – she has quickly established a reputation for consistently delivering an energetic and colourful collage of turbo-charged breaks, glitched-out vocals, and brain-melting bass drops. It’s no surprise, then, that she’s been invited to share bills with the likes of Samurai Breaks, Jaguar, and rRoxymore. As she continues to take a gleefully unapologetic approach to mixing, by blending and somersaulting between jungle, footwork, drum n bass, and everything in between, it’s clear this one’s one to watch.

MISS KENDAL
Miss Kendal is a strictly vinyl DJ, she's never recorded a mix and has no socials so I have no back up for this but believe me, if you catch a set of hers you're in for a treat. Drawing inspiration from the likes of the Dub One, Equinox and the Outside Agency, it's gonna get dark. 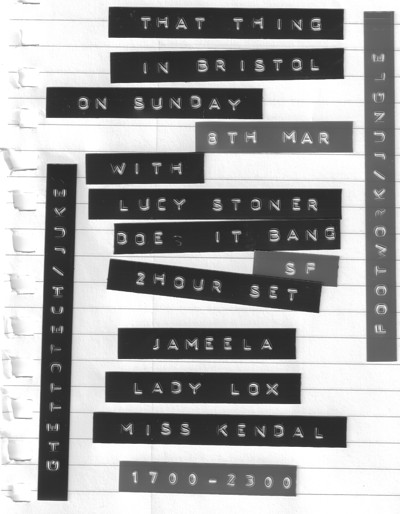