"The Rosellys capture the essence of country, with folk ingredients baked into a transatlantic roots fusion."


"The Rosellys are a band who make no apology for their love of Americana. Musically, they blend English accents with lyrical references to both the UK and US alongside well pitched bass, feisty drum beats and stunning pedal steel and fiddle to create a sound that walks the fine line between Celtic folk and Americana"


In 2015 The Rosellys signed to Clubhouse Records and released their first full band album 'The Granary Sessions', gathering praise from musicians, critics and audiences alike. They have toured extensively across the UK, Australia and America - notably the Southern States where San Antonio (Texas) has become their second home. Influenced by artists such as Emmylou Harris, Gram Parsons, Alison Krauss, Chris Stapleton, Gillian Welch and Dave Rawlings, it is clear The Rosellys have an absolute love for Americana music.

The Band formed when Rebecca (guitar/vocals) met Simon (guitar/vocals/fiddle) in 2005. Allan (pedal steel/resonator) joined the band in 2006 - recording on all of their albums to date including Drive Through The Night (2006), One Way St (2008), Two Much Like Trouble (2011) and The Granary Sessions (2015). Matt (bass) joined the band in 2015 creating a powerful alt-country sound.

Several tracks from 'The Granary Sessions' have had airplay on BBC Radio Ulster (Cherrie McIlwaine & Ralph McLean), Amazing Radio (Baylen Leonard) , The International Americana Music Show (Michael Park), Dublin City FM (Noel Casey), The Miller Tells Her Tale (Karen Miller) and The Americana Music Show (Calvin Powers). 'The Granary Sessions' was listed in the Cadiz Music 'Best of 2015', Adam Wilson's Quiet Revolution 'Best of 2015' and Macwood Fleet's 'Best of 2015'. Nashville Over Here included The Rosellys' album release show at The Green Note in Camden (London) as one of their 'highlights of 2015'.


"Hailing from the UK, The Rosellys are really quite an exceptional band that proves the British country music scene is by no means dead and buried" 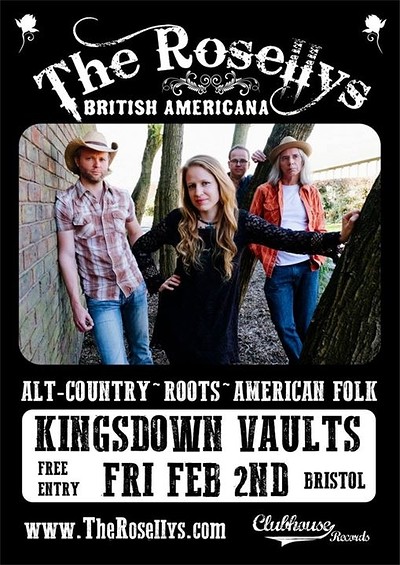