The Legendary Johnny Osbourne
Original King of the Dancehall Era Plays Bristol
Johnny Osbourne is one of the most popular Jamaican reggae and dancehall singers of all time.
Rising to success in the late 1970s and mid-1980s, his album Truths and Rights was a huge roots reggae hit, featuring timeless tracks such as “Jah Promise” and the titular “Truths and Rights”.
He also enjoyed big hits with covers of U.S. soul tunes like “Ready or Not” and Earth Wind & Fire’s “Reasons”. Thanks to his nickname of ‘Dancehall Godfather’, Osbourne is the most in-demand vocalist for dub-plates, best known for his mid-1980s dancehall reggae hits “Buddy Bye", "Ice Cream Love”, "Water Pumping", "Give a Little Love” and "Kiss Some Body”.
Join us for his first ever Bristol debut this October 4th at the Kuumba Centre.

DJ Fatta from the French Soul Stereo Sound System
After having worked as reggae specialists at the notorious Patate records shop in Paris, the early core of Soul Stereo, Jamaican music buffs Fatta and Reecko, decided to take the next step and start their own sound system in 1998.
Following the success of that early gig at le Divan du Monde, they'd go on to fill up the best clubs in France's capital years to come as resident DJs and selectors. They have since gone on the road and have played no less than 1,500 shows all over France and Europe: Italy, Switzerland, Germany, Israel, Scandinavia, you name it. Along the way they have earned such a reputation of excellence that many artists have accompanied them and grabbed the mic for Soul Stereo, the most famous include Junior Kelly, Luciano, Mikey General, Morgan Heritage, Lone Ranger, King Kong, John Wayne, Reggie Stepper, U Brown, Max Romeo, Rod Taylor, Earl Sixteen, Dennis Al Capone, Frankie Paul, Tony Roots, Nerius Joseph, Lyricson and many more.

The Pure Voice of Princess Linn
The London based Princess Linn is a pioneering voice on the UK reggae circuit, honed her craft from her early years with soulful gospel foundations onwards to her times as member of the Royal Rasses band with the legendary Prince Lincoln Thompson.
Her collaborations include showcases with reggae luminaries like Sugar Minot ,Leroy Gibbons, Horace Andy, G. Vibes studio and numerous others. Her most current releases are the well received 10inch single "Cyan Conquer" and the follow up release "Rally", results of her longstanding collaboration with Roots Hitek music and has lately been a dynamic regular on live platforms like Club Roots Underground London and Ital Garden events Bristol .

Natty Frontline The Foundation Selecta
In case you don't know, Natty is an original selecta from the golden age of UK Sound Systems. He has graced some of the biggest Sounds in history from the highly respected Sufferer and Frontline, to the mighty Sir Coxsone Sound!
Sometime in the early 80's, Natty went into early retirement depriving the scene of one its most dynamic forces. A few years ago he returned shaking things up with a now, historic meeting at Tighten Up with the awesome Ras Digby from the mighty Sir Jesus JesusSound:

Ras Digby the Dubplate Master Selecta
'The Ras', (as he's affectionately known in Bristol), is a true legend - a phenomenal selector and one of the most respected presences on the international Revival scene with a selection few could match.
Expect non-stop killers 'n' thrillers and exclusive dubplate

Pappa Roots Sound System
Pappa Roots sound system was established in 2004, but the crew are veterans with operator/owner David House who is also part of one of Bristol’s foundation Sound system Enterprise. Pappa Roots have met other sound system giants such as Aba Shanti I, Channel One, Iration Steppas, Jah Tubbys , Word Sound and Power.
The story of Pappa Roots started back in the 70s with Enterprise sound, a true foundation sound system of that time, playing the likes of mafia tone hifi Sir Coxsone, Moa ambassa sound, Lord Koos, Small Axe and Jah Tubbys, playing them at Cubies nite spot. These are just a few of the house hold names from back in the sound system heyday. They have also played with reggae greats such as D,Brown and Prince Fari Bim Sherman to name just a few.
The history of this sound is deep, Sound System is the voice of the people, The Roots!!!! 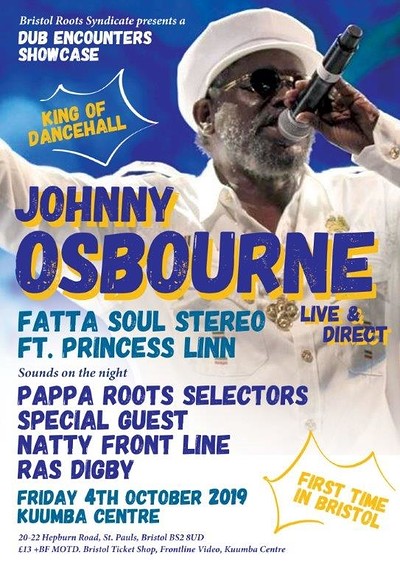