Their debut album, 2014's Big Guys (Lava Thief), righteously filled a kaleidoscopic void in instrumental music and along with 2016's follow up album, Liquid Of Choice (Bad Elephant Music), the band gained an infamous reputation for their awe-inspiring live shows across the European and UK art rock scene, including the La Ferme Électrique , ArcTanGent and Bad Pond festivals. With a third album ‘Firm but Fair’ released on Bristol’s Stolen Body Records and gaining some airplay on BBC Radio 6 from the single ‘By Monday’, The Brackish are storming the stage again with a new brew of gracefully strange arrangements and improvised auditory theatre.

Don't forget we also have our Happy Hour on between 8pm and 9pm. £2.50 on all pints and selected spirit and mixers. 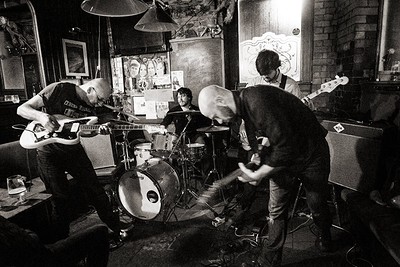