Thursday
11 Nov 2021
Goldie Lookin Chain
Dr Syntax
AAA Badboy
Ticket £10 / £13 / £15
Newport's finest, Goldie Lookin Chain will be landing at Lost Horizon HQ and delivering a show jam packed full of comedic rap as part of their 'Straight out of Lockdown' tour. With UK hip-hop legend Dr Syntax, and Bristol's own AAA Badboy bringing the support, this one will be an absolute banger... you knows it!
Goldie Lookin Chain
Coming straight out of Newport The GLC are officially Britain’s biggest rap group. Known for classics like 'Guns Don’t Kill People Rappers Do' and “Your Mother’s Got a Penis”, The GLC started almost by accident around the turn of the century with Eggsy’s impromptu rap about his tracksuit over a serious piece of music Rhys was working on in the studio. And so it began, the journey which has so far seen The GLC rise to the top of the charts, perform around the world, and make millions of people laugh along the way.
Dr Syntax
UK hip-hop legend Dr Syntax has been releasing music and performing since the early 2000s. Coming through with Foreign Beggars, with whom, he toured for a number of years, before joining Manchester hip-hop band The Mouse Outfit, appearing on all of their albums and performing with them at countless venues and festivals across Europe. Nowadays, he is mostly known for his collaborative work with producer Pete Cannon 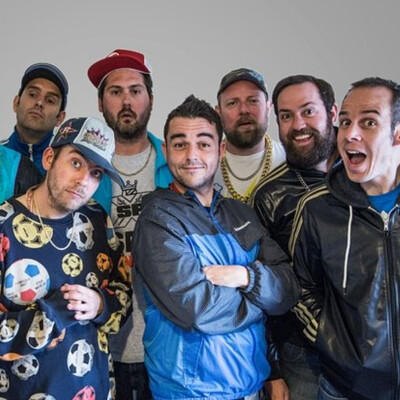