...let's set the scene. It's the year 3069 ;). The world has come to an end and a badass group of women and non-binary survivors have formed a cult to fight the apocalypse. The gang must venture through the wreckage to put on the last remaining club night on Earth.

We are BACK, people! Have you missed us???

We are now at Lost Horizon - fully accessible ...and IT'S PINK!

Coming back bigger and better with an incredible new lineup!

FEMMEGEDDON is a female/NB run show specifically for the Lesbian/bi/pan communities.
Allies are welcome in this space to support us!
Expect to see a variety of live performance, art and music. Followed by a DJ set ‘til late!
There are a few simple rules: transphobia, misogyny and racism will not be tolerated.

Presented by DELiRIUM - A Bristol based Drag queen and founding member at Slaughterhaus, also known for her BBC documentary saved by drag.

We cant wait to announce this incredible set of performers to entertain you!! 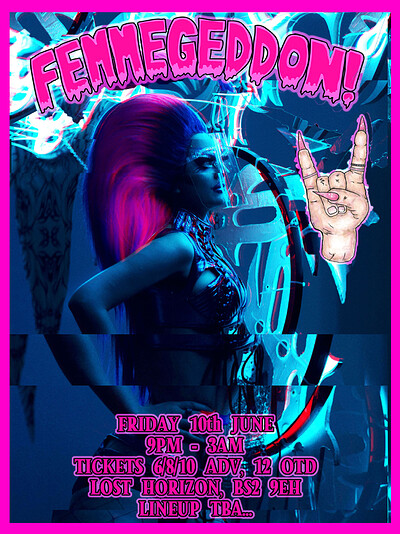