HEADFIRST NOW SOLD OUT, TICKETS STILL AVAILABLE ON SKIDDLE >>> https://www.skiddle.com/whats-on/Bristol/Lost-Horizon-HQ/Eminent-x-Subtrax-w-Bakey-b2b-Frazer-Ray/35995903/
Following a debut collab show bringing Leeds based Peaky Beats (Live) to Bristol. Eminent and Subtrax are teaming up once again for 2022 and bringing with them a series of events delivering the freshest cuts, bass heavy bangers and nawti 4x4 wafters.

Bakey, a true heavyweight producer and selector on the UK circuit. Very much a significant player in the resurgence of UKG, Breaks and dirty ‘dub edits’ sweeping the country. With huge releases on ec2a, Shall Not Fade sister-label ‘Time Is Now’, and Gimme A Break…Bakey has an arsenal of tunes guaranteed to do the damage in the dance.

Hot off the back of several standout performances and iconic Keep Hush sets last year, we’re now teaming him up for a special B2B with the one and only Frazer Ray.

FKA Soundbwoy Killah - Frazer Ray is fast becoming one of the UK's staple underground DJs and producers who dips through multiple genres, touching on electro, breaks, UKG & techno. Recent performances include B2Bs with Breaka, a Phonox colab residency with the legendary O’Flynn, and a special appearance for Keep Hush in London. Frazer’s high octane DJ sets are built on a rich legacy of UK dance music filled with rumbling breaks, rave sirens and euphoric, entrancing vocals.

Papa Nugs
Papa Nugs is a London based producer and DJ. Having been mixing garage, jungle, electro, ghetto tech and breakbeat for 5 years, when lockdown hit, and having been surrounded by the Leeds music scene for 4 years, production became his main focus. This has since seen him release on the likes of labels such as EC2A and DimSumRecords, as well as physical releases on Ba Dum Tish and Gimme A Break. With forthcoming physical releases on Instinct, Puresa Records, Outhouse Sounds, Peaky Beats and South London Pressings, a Papa Nugs set is not one to be missed. Expect to hear a huge spectrum of genres throughout his sets, as is the same in his production, which comes from a pure love and passion for multi-genre blending.

Last summer saw Papa Nugs play at multiple events and festivals across the country, including a B2B with mr potassium himself Dr Banana at We Out Here Festival, a 2 hour multi-genre set at The Kaleidoscope Festival, and a closing set at The Anachronica stage at Leeds Festival.​​
________________
A for Alpha

A For Alpha is hugely inspired by 90s Underground and the different twists and turns that this infamous decade took. Cutting her teeth in the Garage scene under her previous alias ‘A-Bee’, A For Alpha continues to push this raw and crunchy Garage sound, alongside chunky House and Techno tracks full of swing.

Also inspired by the sounds of early Hardcore, Rave and Jungle, you can expect to hear elements of these genres worked into her sets, productions and radio shows. A For Alpha finds ways to blend and rework the older tracks with new productions that follow the same characteristics of chunky, skippy, euphoric and smooth.

During her monthly show on Bristol’s SWU FM you can expect to go on a deep trip through Garage, House, Techno, Jungle and Hip Hop, alongside features from some of her favourite artists new and old.

She is deeply influenced by infamous underground labels such as Nice N Ripe, Wiggle, Slapfunk, Very Important Plastic, Centrestage and Tripoli, this can be heard throughout her sets and productions.

Earlybirds tickets available via Headfirst from £8 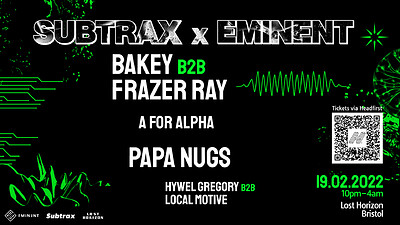