— Lost Horizon
our biggest and wildest anarchist fundraiser so far, for the Anarchist Black Cross in Moscow
price: Headfirst Tickets

On the last Thursday of June, we’ll be taking over Lost Horizon with our biggest fundraiser yet, raising money for the Anarchist Black Cross in Moscow. The ABC is a worldwide network, providing multifaceted support to political and class struggle prisoners. They subsidise legal aid, organise emotional support, facilitate communication, write letters, and more. In the aftermath of Russia’s invasion of Ukraine, thousands of people have been charged and sentenced for justified anti-war protest in Russian cities. All profits from this event will be donated to ABC Moscow and their fight for the freedom to protest. If you want to find out more about what the Anarchist Black Cross does, ask our own Bristol ABC, who will be holding an info stall at the event.

Aside from being a fundraiser, this event will run as an immersive, multi-genre show that bridges the gap between performance and club night. The programme features live music melted into DJ sets from multiple collectives, all submerged in 3-dimensional set dec with contributions from UK, Polish and Belarusian visual creators. We will be hosting speeches, screenings, and art-related efforts. From there, the artists and performers will take you through a stimulating show, charged with dance and joyous confusion.

⚠️ 3QP Collective are first up, opening the music side of the event with a versatile selection of what Bristol knows best - a full plate of jungle, dub, garage and 140, flavoured with the spice of an ever rising BPM. The savage and unhinged brainchild of @ollie.atherton, @chrismoai and @jakob_brunner_, 3QP are on the ball with every track they spin, yet somehow always pushing the limits of how many times you can play ‘Welcome to London’ at a clubnight in Bristol.
(They’re bringing more to the table than just your standard party pack: Artist Block Bristol is joining them to showcase a handful of aspiring Bristol-based artists in an intense art battle, during which the artists are given a specific time slot to create a piece on-stage, before your very eyes. The audience is invited to vote for a winner. Vote!)

⚠️ SPIN THE WHEEL is a South-West-based platform for emerging talent, grassroots events and a central hub for releasing unheard, underground music. Headed by DJ and promoter AKA Alex, the label currently works with artists including x-o1, YBOT, L-FE and King Com. Alongside releasing music, Spin has run regular events in Bristol at venues such as Loco Klub, Cock And Tail and most recently Dareshack.
Taking over Lost Horizon are three of the label's resident DJs. On top of contributing to the organisation of Spin events, Benkins is a regular DJ across Bristol, as well as a core part of the epic jazz group GOYA. Known for a faultless tune selection for pretty much every genre. One of Bristol’s most exciting and illusive new selectors. Also on the bill, TrES-2B doesn’t bow to convention, traversing the underground with a solid selection ranging from 130-170. Completing the trio will be Jack Jordan, one half of boundary pushing garage duo Earthnut who have released on labels including Strictly Flava, Slime, 3 Feet Deep and most recently Southpoint.

⚠️ TONFA (PL) is an experimental twist on Polish hip-hop, featuring brain-melting lyrics spread over raw, murky and unpredictable beats laden with dark rythm sections. The duo formed in Warsaw in 2018, and released their first project (TONFA EP) in 2019. They rapidly stormed the Warsovian underground scene and soon started performing at off-mainstream festivals all around Poland, alongside playing their own shows. 2021 welcomed their debut album (KLĄTWA LP), followed by their newest release (PLUTA EP) in April 2022. TONFA’s live shows are a massacre of tranquility, powered by moody shadow energy and an attitude that rings true only to punk. They often employ live drums in their sets, taking their stage presence to another level, engaging and holding their audience in a powerful grip. Tonfa always has three ends.
https://linktr.ee/TONFA

⚠️ BIPED is a miscellaneous artist without a genre to rest in, wandering heavily. Their work builds on the poetry in life - it hurts, it holds, it carries and it teases. Comprised in equal parts of sex and bile, BIPED’s shows are as peaceful as they are violent, as alluring as they are intimidating. Speaking to the most beautiful and disgusting parts of human nature, their stage presence penetrates the flesh and enters the body of audience forcefully, demanding precise attention, clawing at the boundaries of performance. Challenging to witness, impossible to describe: see for yourself and do your worst.

⚠️ Cybornetic Industrial rap duo KINLAW & FRANCO FRANCO teamed up for repeated spontaneous neural-freestyle sessions within the gorges and dungeons of Avon some time in 2018.
The duo blends Italian ill-rapped nervously apathetic tales from the present and the future with decraniumatossically blasted beats stuffed with nuclear reactor failures and Aztec whistles. ‘Mezzi Umani Mezze Macchine’, came out on Avon Terror Corps in April 2018.

We have some surprises in store, yet to be announced, so stay turned in for updates and big reveals via ABC Bristol: https://bristolabc.wordpress.com/ and Spin socials: https://www.instagram.com/spinthewheelmusic/ 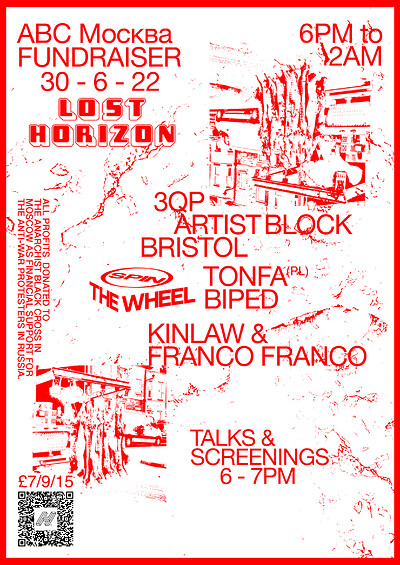