— Motion
After the success of our YARD weekender, everyone’s favourite house and techno day party
price: Tickets Below

This time, the lineup is headed up by musical connoisseur Hunee – who has slowly seeped out into the world his choice cuts of rhythmically playful and soul infused house music, on labels like Rush Hour, Future Times and W.T. As likely to draw for a classic house record as he is a disco curveball, a boogie delight or mixing an African bomb into a techno record, each selection he makes is a thing of true passion – you can see it not only in his eyes, but so too in the eyes of those dancing along to his sets.

Joining Hunee on the Container Yard stage is Dar Disku, a DJ Collective who celebrate music from across Arabia; Darwin, a Canadian DJ with a laser focus on UK club music, joining the dots between techno, dub, and breakbeat; and Motion resident Ellis Roberts.

The Crane Yard stage will be headlined with a b2b set from Young Marco and John Talabot. Young Marco has a reputation for ballsy, genre-defying eclecticism, playing sets that joined the dots between everything from tropical rhythms, afro gems and quirky Middle Eastern disco, to lost proto-house, throbbing techno and industrial-strength jack-tracks. John Talabot has an open-minded approach to making, collecting and playing music – his tireless search for music makes him one of those rare DJs that can effortlessly juxtapose efficacy, risk, and revelation.

Completing the Crane Yard line up is globally respected artist Saoirse, from whom you can expect dub, house, jazz, electro, garage, techno, ambient, breaks and some surprises; and Manami, a Bristol-based DJ who plays music inspired by her diverse upbringing and classical training. 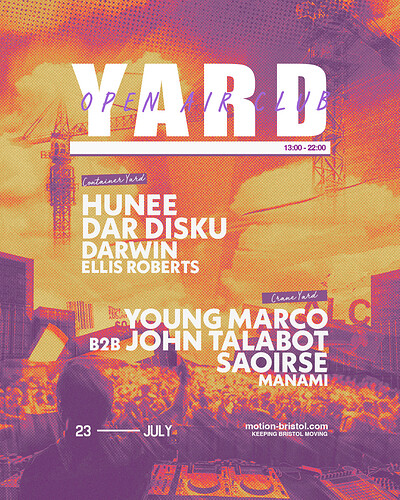