ALTERNATIVELY THERE WILL ALSO BE TICKETS AVAILABLE ON THE DOOR.

Marking 10 years of In:Motion, our milestone birthday for the series is fast approaching and we've put together a momentous line-up to signify the occasion.

Christened 'The Founding Father of House' Lil Louis heads up the bill with two talents who are following upward trajectories in their own right, DMX Krew and Manami.

Widely known for the timeless classic 'French Kiss', Chicago-born producer, selector and pioneer on the scene, Lil Louis is one of those artists who continue to create a sound that's truly his own. With a profile that's followed a steady curve since the late 80s, Lil Louis is now a bonafide legend and a much-loved name on the global electronic music scene, all the more reason to have him back on UK soil for our 10th birthday.

Known for his oddball sounds and sets which encompass everything from bleepy electro to acid techno, London-based producer DMX Krew joins the party. With over 25 years in the business, DMX Krew is still one of the most down to earth artists on the scene and considered a true pioneer in the UK underground community.

Bristol local Manami completes the bill, a name which has appeared alongside the likes of Brame & Hamo, Dan Shake, Move D & many more. The multi-talented DJ, producer and pianist from Tokyo is undoubtedly one of the most interesting new talents on the circuit right now, and the perfect complement to the sounds of Lil Louis and DMX Krew.

As a thank you to our customers for the last ten years we're keeping tickets cheap so everyone can celebrate with us. 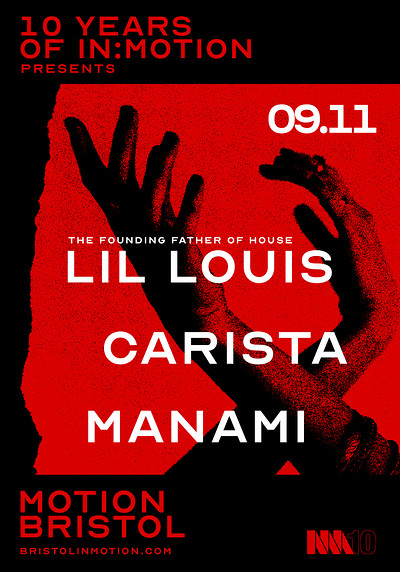