Coming off the back of their autumn UK tour, gürl have returned to their hometown for a headline show at everyone's favourite venue, Mr Wolf's!

From her very first live show in 2018, to recently making
her debut at the O2 Academy Bristol and Glastonbury
2019, Chrissie Huntley is one to watch for 2020.
​
The soulstress kick-started her journey with her mental
health awareness campaign 'Let's Talk About It',
raising £500 for the charity 'Mind' in support of her
first single release- 'If Only I Could'. She has since
performed the song at the UK Houses of Parliament,
supporting National Grief Awareness week, as well
as playing numerous charity fundraiser shows
across the country.
Facebook: www.facebook.com/chrissiehuntleymusic/

Sam’s an extremely talented singer, writer and musician. I'd recommend that anyone who likes thoughtful lyrics presented with an elegant simplicity should check him out” - John Porter, producer to The Smiths

Sam Animal is the evolution of Cornish singer-songwriter Samuel Powell. His songs span the Indie-folk/alternative-rock spectrum, sitting in their own unique genre. His live set is ripe with free expression and personality, and demonstrates a gifted feel for songwriting. Sam is based out of Bristol, where he achieved a degree in song writing. He grew up however in Cornwall – learning songcraft, performance and sound engineering along the way. Sam currently works with a variety of fantastic musicians, and after recording a number of his songs in 2019, he is busy prepping for their release this year. Keep up to date with Sam by following instagram.com/samanimalmusic/

Live music followed by DJs keeping you dancing until 4am! 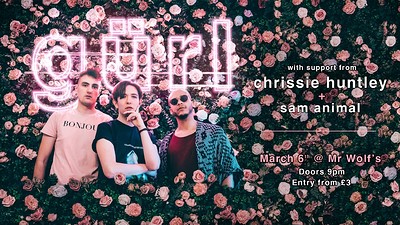