Wine Morals: Bristol based Art Rock band formed in 2017 on the moon Born from the demise of Red Morning Light and a merger with Far From Animals, we are a Bristol/Swansea based band with genre dysphoria that write music we want to hear. Our first EP Shake the Glass is on all streaming services now.
https://www.facebook.com/Wine-Morals-860016410689582/

Matthew North: One Voice, one Guitar and a Lot of pedals’ is a pretty good description of a Matthew North solo show. Matthew has been performing his own brand of singer / songwriter material for a few years now and in 2017 released his first studio album officially. Matthew started out as the founder member of the gothic rock band ‘All Living Fear’ with a reasonable amount of success in the 90s and beyond. In the last few years he has expanded his musical horizons by first forming the Progressive influenced band ‘Secrets for September’ before joining legendary Jazz composer Mike Westbrook. Matthew has collaborated with the likes of Arthur Brown and members of The Cure and All About Eve. Matthew has also a keen interest in Photography and film making. Always interested in new musical projects and ideas.
http://www.matthewnorthmusic.co.uk
matthewnorth
Instagram @matthewnorthmusic
Twitter @mnorthmusic
MATTHEW NORTH MUSIC
http://www.matthewnorthmusic.co.uk
http://www.facebook.com/matthewnorthmusic
http://twitter.com/mnorthmusic
www.soundcloud.com/matthewnorthmusic 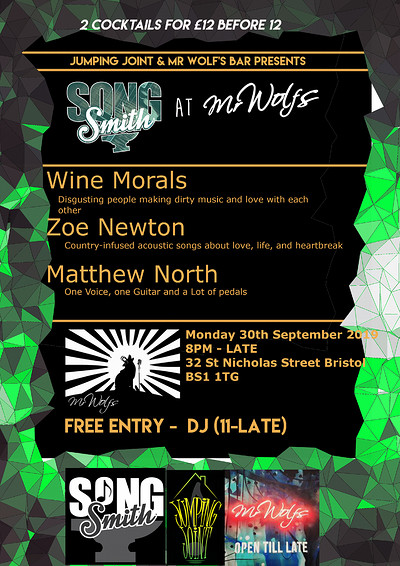