Harry Munk: are an alternative/ fusion dance band who mix electronica with live instruments. Hailing from Devon and Cornwall, this female fronted 5-piece fuses together elements of drum and bass, dub and rock with heavy guitar riffs, killer basslines and kick arse vocals. Harry Munks new album is set to be released by the end of 2016 and will be free to fans via download. The band records, masters and produces all of their original music and music videos.
https://www.facebook.com/realharrymunk/

Will Purdue Band: Will is an Alt Country Singer - song writer, inspired by the likes of The National, R.E.M. and Leonard Cohen. Will's music is based around his brand of dark folk which is then transported towards AltCountry with the musicians around him. Expect an intensity to his live performances, a deep honesty to his lyrics and big choruses. Will has performed at Celtic Connections Festival at Glasgow Concert Hall as well as other festivals including Byline, Kaya World Music, London Blues Fest (Reading Leg) and Always The Sun. He has supported two of his influences (Jessie Malin at Oxford o2 Academy and Dave McPherson of Inme at Central Studio Basingstoke), and put on two really successful evenings himself at The Troubadour, Earls Court and The Half Moon, Putney. The first (mini) album was released in May 2018, called ‘Rumour & Confession’ following on from his ‘A Past Life’ EP from June 2016. He’s had radio AirPlay from BBC Introducing, as well as online and local radio shows from England, Scotland and Argentina. In March 2019, Will is releasing two singles; ‘I Don’t Think We Should Rush In’ and Bedside Table. Will embarks on a tour at the start of March to support this, and is currently filming a two part music video ready for their release.
http://www.willpurdue.com
https://www.facebook.com/willpurduemusic
https://instagram.com/p/ Bn7Kncdgdpk/
https://www.youtube.com/ channel/ UCiBZ0VUvPR_2xeiq3ThrXvg
https://open.spotify.com/track/ 2gboyHAYIIYTDwxanvZ0sR

Mark Darkside: A mixture of his own highly original and eccentric Mark Darkside songs, plus maybe a couple of the more obscure and darker Elton John experience songs from when the sun goes down on him … (that sounded ruder than intended … )
https://www.facebook.com/Mark-Darkside-Music-146726415373540/

Craigi Love: Provider of House & Techno plus SF dub and roots - Affiliated with The Prog Lab. He plays other people’s music. He photographs other people’s stuff. One world, one heart, one love. 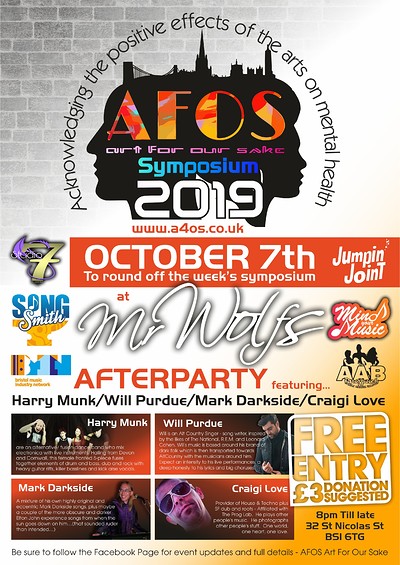