This spring, London based 7-piece festival favourites Cable Street Collective are embarking on a mini-tour, with shows in Cornwall, Wales, Bristol and their native London, among others. Taking a break from recording their latest album, the band will be road-testing new material as part of their set of African-influenced, alt-pop bangers.

Despite the lingering influence of Covid lockdowns on live music last summer, Cable Street Collective played a near-full summer of festivals, with slots at Latitude, Underneath the Stars, Altitude Festival and Elderflower Fields, to name a few.

The band has been a fixture on the festival circuit since the release of their first EP in 2014, and have since built up a stellar reputation as a live band, with shows Glastonbury, Shambala, Boomtown, The Isle of Wight Festival, Bestival, Secret Garden Party, and the Lake of Stars Festival (Malawi). Their second EP, Where Now From Here? (2018) earned them critical plaudits and radio play on BBC Radio 6Music, Radio X and Amazing Radio, among others.

Cable Street Collective are currently recording their debut album, due out in spring 2022. Current releases such as The Wolf (Nov 2021) and Bells & Whistles (March 2021) are favourites of BBC Radio 6’s Tom Robinson. 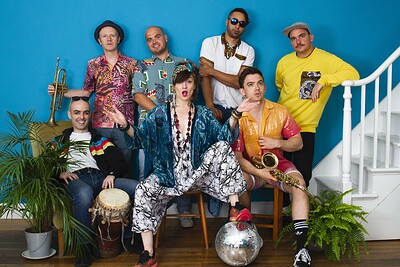