••• Beat Harlows •••
A bittersweet indie-ish 5 piece with an authentic unpredictability.
A Wailing 60's organ blends with sweet and tender guitar parts, backed up by a pounding manic rhythm section.
Soaring falsetto backing vocals intertwine with a broken baritone lead. The vocals dip in and out of shyness and genuine frustration, sarcasm and ecstacy.
Balancing well in the light between garage rock and sweetly crafted songs, they have only been together under a year, but are gaining a reputation rapidly.

•• InterFlux ••
InterFlux are a young, fertile, two man band forged in the eternal flames of boredom in a small seaside town in Wales. With nought but the swirling thunder of b...

• Finding Aurora •
Finding Aurora are a 3 piece rock and roll band. The 3 piece began the writing of their first EP in November of 2017, taking inspiration from bands/artists such as: Foo Fighters, Royal Blood, Queens Of The Stone Age. The band made their debut gig at The Dragonffli, Pontypool in May 2018. Since that date the band have headlined Le Public Space, Newport twice and have recorded their debut EP with producer and engineer Jeff Rose. Over the short period of time the band feels they have accomplished a lot in such a short period of time. If you like raw rock and roll music, Finding Aurora are right up your street. 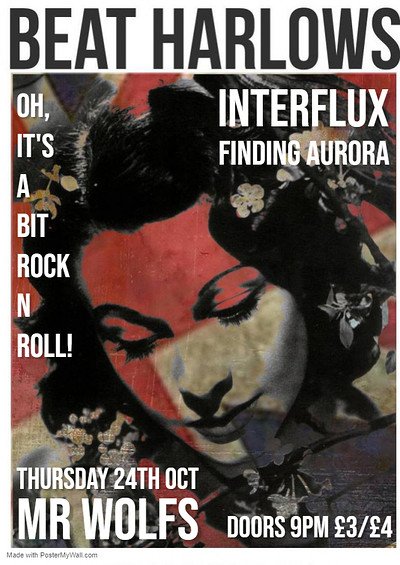