£5 per person. DJ Food, DJ SUV & Ray Mighty plus Queen Bee will be lighting up the garden as part of the Outer Space grande finale.
DJ Food
DJ Food is an electronic music project currently headed by Kevin Foakes (also known as "Strictly Kev"). Originally conceived by the members of Coldcut on the Ninja Tune independent record label, the project started in 1990 on the premise of providing metaphorical "food for DJs". DJ Food released the Jazz Brakes series, with Jazz Brakes Volume 3 being the most successful. The records consisted of collections of breaks, loops and samples that could be used for mixing, remixing and producing. With nearly 25 years of DJing experience and more than a decade serving up Food for DJs, for both Ninja and Coldcut's weekly radio show 'Solid Steel', Kev is now in the Food hot seat.

DJ SUV
As a crucial member of the respected original FullCycle V recordings and Reprazent  Stables, Suv has undoubtedly contributed his fair share to Drum n bass and definitely to the sound of Bristol. A member of the seminal Bristol trip hop group FRESH FOUR in 1989 burst onto the scene with  Smith 'n' Mighty and the first ever Trip Hop track to have major success with  'Wishing on a Star' reaching top of the UK charts. Mercury Prize winner in 1997 and MOBO prize winner as the group name of Ronisize Reprazent. Suv has continued to carve his musical journey as a producer, singer song writer, DJ, always with the intent to break new ground.

Ray Mighty
Long before Bristol had become a recognised stronghold for down tempo trip-hop and spy-soundtrack dubs, the duo of Rob Smith and Ray Mighty teamed in the late '80s for two early breakbeat tracks, "Walk on By" and "Anyone Who Had a Heart." The anachronistic fusion of sophisticated Burt Bacharach productions with laid-back hip-hop prefigured trip-hop's later fascination with the more polished end of '60s adult-pop. 30 years in the business and key figure on the Bristol music scene, Ray Mighty graces us with his presence and talent for an alternative funk set accompanied by Guy Calhoun on guitar.

Queen Bee
Since the late 80’s Queen Bee has been an integral part of the Bristol massive scene. With a genre jumping range from reggae, afro beat and funk to Drum & Bass and Dancehall Queen Bee has been smashing it up long time at the seasons biggest festivals including Shambala, Shin Dig, Mucky Weekender, Womad  and Glastonbury.
Queen Bee has been holding her own and carving it up with her old skool vinyl mash up for decades and while her sound has developed, she remains true to her funk and reggae roots. You can expect to lose yourself with this genre hopping Queen in a wonderland of grooves  . 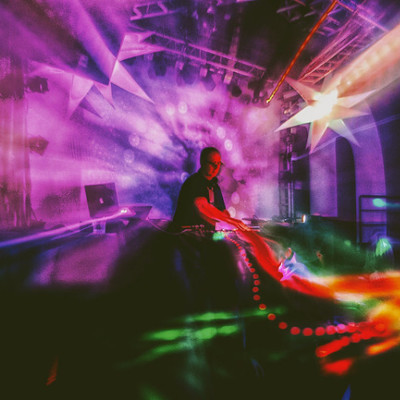