— Rough Trade Bristol
Our second event stumbling along the murky threshold between electronic and rock music - this will be an eclectic evening of both.
time:19:30
price: Headfirst Tickets

After Be Softly #1 sold out, we have curated our second event, again stumbling along the murky threshold between electronic and rock music - this will be an eclectic evening of both.

TAYNE
London's most Bristol-sounding band, for fans of HEALTH and Nine Inch Nails, have been relentlessly touring their 2018 record 'Breathe' and we're so pleased to final bring them to venue worthy of their crushing, distorted, angular timbres. Expect more synths than guitars - we like it that way.

DUNCAN SPEAKMAN (LIVE)
After a long self imposed exile in the Belgian underground electronic scene Duncan has returned to Bristol performing under his own name. Layered swathes of resonant harmonics and distortion drawn from processed guitar and decaying electronics are interwoven with field recordings of climate collapse. Think Fennesz or Tim Hecker playing cover versions of Sunn 0))). The emotional weight and horror of the anthropocene brought to bear through beautifully overwhelming waves of melody and noise.
Best known for creating richly cinematic sound performances as Circumstance in collaboration with Sarah Anderson (Chrome Hoof, Bas Jan, Deep Throat Choir), Duncan’s solo work taps into a more raw, improvised and visceral sound world.
Previously working as Valid Lover, his intense live performances have appeared sporadically around the world with artists such as Tetuzi Akiyama (Nijiumu, David Sylvian) and Yannick Frank (Orphan Swords, Raum) and has created remixes for Artmagic (Richard Oakes,Sean McGhee), Angel Tech and Kate Havnevik.
https://validlover.bandcamp.com

STEFAN GOODCHILD (DJ)
Stefan Goodchild is an AV artist and designer, best known for his live modular visuals that have backdropped LCD Soundsystem, Peter Gabriel and Queen, amongst others. His musical works reach back over 25 years, notably to the late 90's as Stabilizer, and more recently as a remixer for Nine Inch Nails and Peter Gabriel. From Bognor, to Berlin, to 5000 damp punters at in Glastonbury's John Peel tent, he has DJ'd the world-over. We proudly released his 2019 offering 'Something Electronic' via Be Softly, and we're dragging him out for a live set. Expect wonk.

THOSE WHO CAME BFORE US AND US WHO ARE YET TO FOLLOW (LIVE)
The moniker for the ambient soundscape works of local modular guru, and long-time Be Softly friend & collaborator Ben Chilton, who deconstructed Poisonous Birds' Big Water for 2018's Dirty Water remix EP, and appeared at one of our earliest shows under his now-defunct Regolith alias. Sitting on the wide spectrum between all-out noise and softly melancholic ambience. Expect pure tones layered with the chaos of the city. Ascendant oscillations battling with sub pressure and drunken rhythms for a place in the sonic field. This performance will be centred around site-specific recordings taken close to the venue and processed live.
https://thosewhocamebeforeus.bandcamp.com/

Listen to the Be Softly Radio Show on Mixcloud: https://www.mixcloud.com/besoftly/ 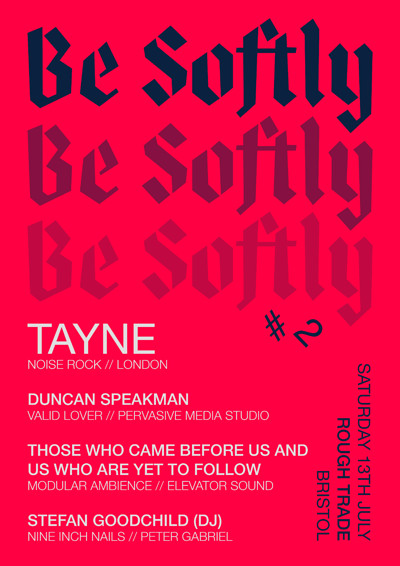