Originally released on the 20 April 1979, Y represents a stunning culmination of The Pop Group’s crucial nonconformity. Preceded by a meteoric rise in recognition, Y firmly realised the latent potential of the group’s early years. From playing Bristol youth clubs to early gigs supporting Pere Ubu and Patti Smith to gracing the front covers of NME and Melody Maker, The Pop Group’s progression to the forefront had been swift. With the recording of Y, The Pop Group were to build on the promise of these earlier experiences and of their first recordings, delivering a debut album that transcends most, if not all, classification and one that exists in a league of its own.

Upon release, Y soon became a pivotal and epochal classic. In the years since release, its relevance has stood undiminished; an accomplishment that has lost none of its fearless sense of ambition and attack.

The album was produced by dub maestro Dennis ‘Blackbeard’ Bovell, with Ybecoming his first non-reggae project. The group’s decision to collaborate with Bovell is emblematic of the risk and range found on Y, where tracks are adeptly moulded with reverb, delays, tape loops and a range of other studio treatments. The results corral all of the captivating mixing desk ingenuity that Bovell had been previously applying to UK reggae and lovers rock, making for a record that ventures into altogether unchartered territory. 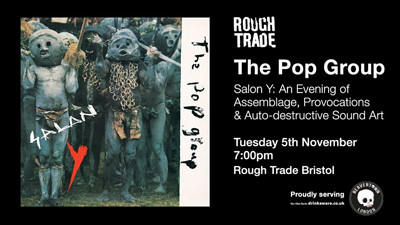