Much loved Yorkshire folk duo Belinda O’Hooley and Heidi Tidow have suddenly been propelled into newfound fame for penning the theme tune for Sally Wainwright’s hit BBC1/HBO drama ‘Gentleman Jack’, earning them global admiration, appearances on TV, Radio 4 Woman’s Hour and concerts that sell out months in advance.
February/March 2020 sees the duo playing significantly bigger venues as they embark on their #GentlemanJack Tour. The eight date tour is a celebration of the success of their song and features two key locations in the history of Anne Lister. The duo will perform an intimate, candlelit show at York’s Holy Trinity Church, where Anne Lister and Ann Walker received the eucharist together; which is widely viewed as the first same sex marriage. They will also perform at Halifax Minster; the burial place of Anne Lister.
Belinda and Heidi have loved working with fellow Yorkshire woman, Sally, describing her as ‘down-to-earth, passionate and wildly creative’, sharing their love of both interesting, formidable, and complex women together with a deep appreciation of the rugged Northern landscape they all grew up in. Their boundless songwriting has been described by The Guardian as ‘exceptional’ and The Independent as ‘defiant, robust, northern, poetical, political folk music for the times we live in.’
www.ohooleyandtidow.com
please credit photo to Hannah Webster 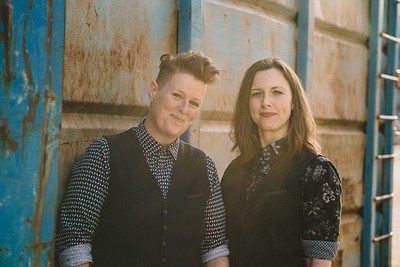