— St George's Bristol
One of Scotland’s most popular folk groups to emerge in the last decade, Talisk return to Bristol in May 2020 - headlining the city’s stunni
price: Headfirst Tickets

Ground-breaking, chart-topping, genre-bending, globetrotting, instantly enthralling… it’s little wonder that Talisk rank highly amongst the most in-demand folk-based groups to emerge from Scotland in the last decade and more.

Mohsen Amini (BBC Radio 2 Folk Awards’ Musician of the Year 2018), Graeme Armstrong and Benedict Morris (BBC Radio Scotland Young Traditional Musician of the Year 2019) fuse concertina, guitar and fiddle to produce a truly innovative, multi-layered signature that has captivated audiences around the globe. At its core, three seemingly acoustic instruments - but in the hands of three master craftsmen; one unmistakable, bold sound and a captivating live show.

“Doubling the power of three” / The Scotsman

“the technical ability of each member is clear in their energetic, dynamic sound” / Songlines

“an exciting sound that, in this case literally, drags an audience out of its seats.” / The Glasgow Herald 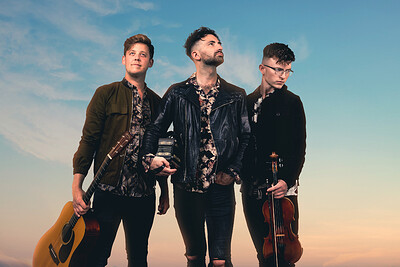