Ka Baird is a multi-instrumentalist and vocalist living and working in NYC. She is one of the founding members of seminal avant-folk/psych project Spires That in the Sunset Rise.

Since relocating to NYC in November 2014, Ka has set off in numerous directions apart from Spires with new collaborations as well as honing in on her own solo work. Her most recent solo release "Sapropelic Pycnic" was released by the long running and reputable Chicago based label Drag City Records in September 2017.

Her second LP 'Respires' is due out in October 2019 through Brooklyn based label RVNG Intl. Her solo sound has been described by Boomkat.com as music "sweeping from alien/avian electronics to Sun Ra-meets-Pekka Airaksinen electro-jazz freenuss".

Over the past few years, her identity as a "live performer" has become arguably the most vital aspect of her practice. During her live sets the instruments she uses seem like mere tools for providing a transcendent experience for the audience. Her performances are vigorous and charged, wild and ecstatic, almost shaman like. Within this realm of high energy and abandon, she displays a total mastery over her tools and knows exactly when she needs to be in control and when she can completely let go. Her many years of identifying as a “musician” have paid off in that respect.

Betwixt & Between Tapes is a series of split cassette tapes, each of which pairs Jacken's banjo playing with music contributed by a different artist."

Tickets from Headfirst Bristol
£6 adv. (or less if you can't afford it, just DM us).
£8 on the door (or more if you can afford it please,
these events are run at a loss...) 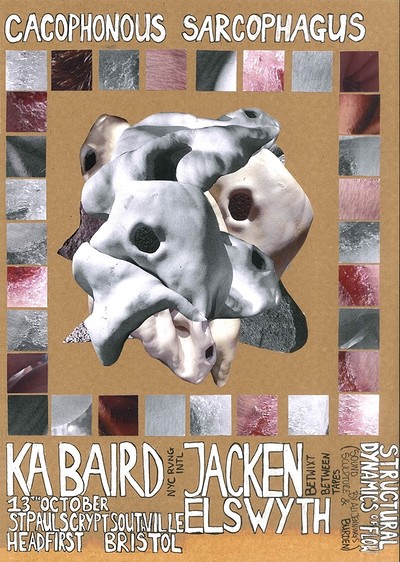