To celebrate the offical lunch of Counter Slip, Label owners "Cando" Invites Surgeon, Alya L and a last minute addition, coming all the way from NYC USA, Ayesha aka "DJ Ayes Cold" to play at Strange Brew on August 27th.

You can catch Surgeon playing a rare 90 minute live performance, along side Bristol's PTS resident Alya-L who's had support from the likes of Timedance along her journey and has become a staple within the Brsitol club scene over the years.

Ayesha's sonic universe is the collision of all her influences spanning the percussive worlds of techno, breaks, and bass. Back in 2013, Ayesha cut her teeth as a DJ coming up in the house shows, warehouses and clubs of DC under the moniker DJ Ayes Cold. Her work promoting and booking electronic music shows instilled a deep appreciation for underground club cultures across the globe. Eight years later, Ayesha's love for digging in the crates translates into an obsession with manipulating found and recorded samples with a playful curiosity, which she also aspires to apply to other parts of life.

Recently dubbed by Fact magazine as “arguably the finest techno DJ in the world”, Surgeon is also naturally one of the most in-demand, with DJ mixes for Warp and Fabric and a schedule spread across Europe and Japan. He has played every key club/event/festival going; helped pioneer Birmingham’s House of God; and, held a 3 year residency at Tresor (Berlin) during its all powerful 1990s peak. He is also one half of the much loved BMB (British Murder Boys) with Regis as well as performing improvised live sets solo and with Lady Starlight, with Speedy J as ‘Multiples’ and alongside Daniel Bean as ‘The Transcendence Orchestra’

Contemporary Surgeon sets are notable for experimentation with new DJ technologies embracing cutting edge hardware and software solutions, increasingly blurring the line between a DJ set and a live performance. Surgeon is a selector of some skill and one of the most inventive, intuitive DJs out there. Using techno as a vehicle to carry his artistic message, he also mixes up everything from contemporary bass music/dubstep to Rephlex-esque electronica to create a coherent, intense and righteously banging whole. More recently live improvisation has become a more important part of all of his performances.


As a Duo, Cando's sound can be best described as a UK Funky -influenced percussive pressure incorporating surging bass along with a blend of tribal Afro-tech drums and blissful synthesizer motifs.

The pair entered the scene in 2019 with their debut release "Bleak/Sundown" for Heavy-weight Bristol techno label Livity Sound.

Since their debut on Livity Sound in 2019, Cando has gone on to release for UK based labels such as; Le Chatroom, Pressure Dome and Par Avion, and have played in various venues around the UK with the likes of Batu, Yushh, Sam Interface, Avernian, Jurango and many more! 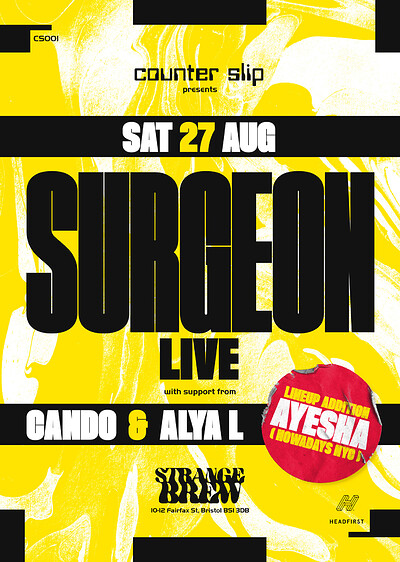