From Afrobeat to Jazz, our Strange Brew Sunday series now extends to Reggae! We're delighted to bring Tropical Pop Queen Hollie Cook back to Bristol for an intimate stripped back live performance.

Daughter of The Sex Pistol's drummer, Hollie combines her unique vocal talent with charming charisma to craft her own dynamic strand of lovers rock with enduring tropical vibes, weaving a path from her West London roots to an arena of diverse collaborations, critically acclaimed records, and iconic live appearances around the world. Cook’s ability to continually surprise, delight, and progress solidifies her position as one of the most exciting voices in reggae. Having spent the year working on new material, and of course an enforced hiatus from touring, getting out on the road is something that Hollie is keen to do, obviously this is a rather different show than the usual one with the General Roots band. A stripped back and more chilled affair, with Hollie on vocals and Luke Allwood on keyboards. After doing a couple of these performances in lockdown, they (and the audience) enjoyed them so much that they decided to take them on the road. A unique show and with a couple of new songs thrown in, this is a chance to see Hollie perform in a very different setting and style!

Having sold out her last Bristol show at Trinity Centre, we're expecting tickets to move quick for this incredibly limited intimate performance.

Jackson Worm will be soundtracking either side of Hollie's performance with a tropical and cross-continental blend of roots, reggae and dub.

In collaboration with the team at Strange Brew, this will be a safely socially distanced event. Tickets will be sold as tables of 5 people, with some additional “premium” tables with a better view available directly in front of the stage.
The music and events industry is in a very tricky place right now, by purchasing a ticket to this event you are helping to support two musicians, the DJ, the sound engineer, the promoters, the amazing venue; Strange Brew and MORE! We thank you deeply for showing love and supporting the music scene! 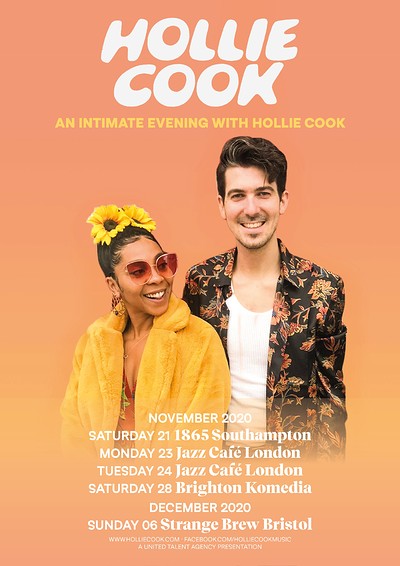