— Strange Brew
MadMadMad, Glows and Robbie & Mona join us for a night of freeflowing experimentalism, each bringing their own unique, genre defying sounds
time:19:30
price: Tickets Below

The Bottle and Erratic Batting have combined to bring their first fully cap live event since this whole mess began, and we are beyond excited to be taking over Strange Brew to bring to you performance from 3 very special live acts.

MadMadMad, Glows and Robbie & Mona will be joining us for a night of free-flowing experimentalism, each showcasing their own unique and genre defying sounds at Bristols most vital new venue.

MadMadMad - Shaped by the mutant sounds of 70’s no-wave, post-punk and disco, but with an originality that comes from a clear sense of synergy that the band draws from current times, MADMADMAD is rocketing their influences into a new dimension. Their unique Disco Noir seeks deliverance from the chaotic and strange times we are now living through, fomenting a deep societal change and, hopefully, a brighter future.

Check out their Boiler Room here: https://boilerroom.tv/recording/boiler-room-x-night-dreamer-madmadmad
Glows - Glows is the project of London based audio-visual duo, GG Skips (Sorry) and Felix Bayley-Higgins. Heavily involved in the curation of the Slow Dance collective, they’ve experimented in all avenues of London’s arts and music scenes in recent years. From forming EMU, a group welcoming rotating members from the likes of black midi, Young Turks and Sorry for improvised A/V performances at the Windmill, to receiving commissions for immersive installations at the Royal Academy of Arts, they have been incubating at both ends of the spectrum. Glows was originally the solo music project of producer and DJ, Skips, driven by propulsive percussion and electronics, alongside translucent synths and soft vocals, the sound restlessly skits from orchestral to ambient to hardcore.

youtube.com/watch?v=Ue-ye2mQMEg
Robbie & Mona - Bristol’s Robbie & Mona, the project of musicians Ellie Gray and Will Carkeet, craft erratic and psychedelic dream-pop, and their debut album ‘EW’ released on Spinny Nights, experiments fearlessly with sonic textures and song structures. The majority of EW was recorded in the cellar underneath Bristol’s most legendary independent venue, The Louisiana, with additional recordings made in their bedroom. While the overall vibe of the record takes many cues from dream pop and lo-fi indie, nothing is certain on first listen. EW expertly toes the line between deep emotional resonance and alienating disarray. 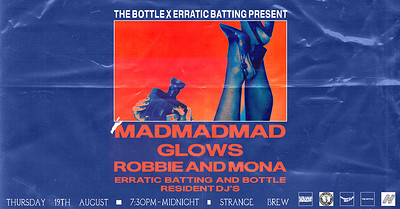