— SWX
As One of the leading swordsmen from seminal NYC rap ensemble the Wu-Tang Clan, Ghostface is widely seen as one of the greatest MCs ever
time:18:30
price: Headfirst Tickets

Hip-hop titan Ghostface Killah returns to the UK for the official launch of his GHOSTFACE KILLAHS album.

There will be ONLY 2 UK SHOWS; London and Bristol. Expect them to sell out.

As one of the leading swordsmen from seminal NYC rap ensemble the Wu-Tang Clan, Ghostface is widely seen as one of the greatest MCs ever to bless the mic: his intricate wordplay creating and conjuring vivid stories from the grittier side of street life in New York’s Long Island and beyond.

Ghostface’s first solo Album did not come about until 1996, four years after he found fame in the Wu-Tang clan. The Album was entitled ‘Ironman’ and debuted at the number two spot on the Billboard 200 chart, a brilliant achievement. The album possessed a distinctive soul style that would continue to feature on many of Ghostface’s songs.

Ghostface Killah’s most critically acclaimed albums are his 2000 venture ‘Supreme Clientele’ and his 2006 album ‘Fishscale’. He is particularly well known for his distinctive musical style: he is praised for his loud, fast-paced flow and his emotional freestyle rapping which often contains cryptic slang.

He was honoured in 2006 by MTV when they placed him on their list of The Greatest MCs of All Time and again by the editors of About.com when he was placed on their list of the Top 50 MCs of Our Time.

Ghostface Killah’s Ghostface Killahs is an album that gives us a taste of the hardcore hip-hop pioneered on the east coast by the Wu-Tang Clan. This will be a show to remember. 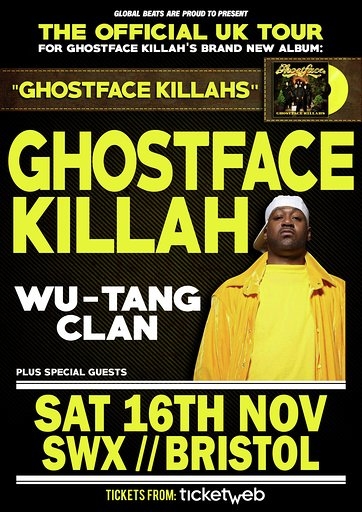