Mishima
Scaley, green and 100ft tall, Mishima could destroy small towns with his lazer eyes. Luckily for you he chooses to play fat breakbeats and psychedelic bass instead.
He has played alongside A-Skillz, Ed Solo, The Freestylers, Aphrodite, and more. Mishima has deejayed in many desirable places - including Glastonbury Festival, Tribe of Frog, Motion Bristol, and your garden shed (when you were out).
mixcloud.com/badbunny

DjCousCous
Conveyor of extraordinary sounds from across the globe.
Specialising in Electro Global Beats, this Dj has been playing on the UK circuit for the past 20 years, performing at Glastonbury, Womad, Secret Garden Party, Bestival, and many more boutique events. Holding down residencies around London such as the much missed Passing Clouds, Hootenanny, The Magic Garden, The Lockside Lounge and London's Morning Gloryville Events.
He was co-founder and musical director of the The Rollright Fayre Festival based in Oxfordshire UK and was also the musical coordinator for The Lizard Stage, a micro stage that tours the UK festivals hosting a range of live acts and Dj's.
His style of music pulls from Afrobeat, Cadence, Cumbia and Tropical House to Drum n' Bass, BrokenBeat, Reggae and Ska. A focus on live instruments from global genres, whilst pushing it to the dancefloor with heavy electro and plenty of BASS!
https://www.mixcloud.com/djcouscous/

Ironside
Veteran DJ of the underground Bristol scene. 20+ years dedicated to the art of selection and playing other people’s tunes one after another. Dancehall, Jungle, DnB and Breakbeat specialist plays at Boomtown and for Police Rave Squad.
soundcloud.com/jamesironside

DJ Skink
All the way from Amsterdam, mixes techno and house on vinyl.
https://www.mixcloud.com/Brapradio/housetechno-drfly-djskink-amsterdam-2may2015-1/ 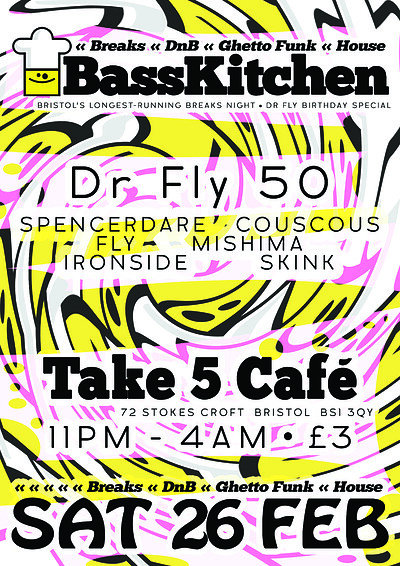