Laid Blak represent the quintessential Bristol music story, formed from the partnership of Bristol producer DJ Bunjy and MC Joe Peng, two legends of the rave and proto Jungle scenes, the pair spent the 90’s causing havoc on dance floors in the biggest raves around the country, performing for the era defining party brands and popping up on all the essential tape packs.

Building on their successful rave wrecking partnership, the pair began to look for a new musical direction and like many of Bristol’s most loved musical exports, they drew inspiration from the melting pot that is Bristol music, which of course has Reggae and Soundsystem culture at its core. What began as a studio project, found them seeking out some of the most impressive musicians the city has to offer and Laid Blak was formed. https://www.facebook.com/Laidblak/ 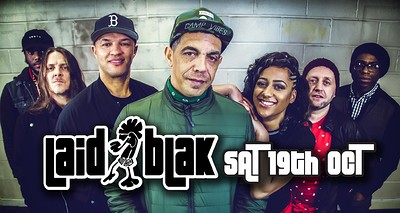