The Sound Of BlueNote has performed all over the southwest, including main stage gigs at Swanage, Lyme Regis and Bournemouth jazz festivals, numerous club gigs at venues such as the Blue Vanguard in Exeter, Sound Cellar in Poole, Southampton, Chichester and Portsmouth Jazz Clubs, The Be-Bop Club and the Future Inn in Bristol as well as Pizza Express Soho, Boisdale Of Canary Wharf, The Bulls Head Barnes and The Half Moon in Putney and more.

The repertoire includes some BlueNote classics alongside some rarely heard gems from the vaults, lovingly transcribed by the band members.

Terry Quinney is Canadian, and attended the prestigious Humber College in Toronto where he studied with prominent Canadian artists such as Pat LaBarbera and Don Thompson. This led to opportunities to perform alongside major stars such as Randy Brecker, Kurt Elling and Dave Douglas, and to become a member of the Toronto Jazz Orchestra. Terry moved to the UK in 2009 settling in Somerset, having believed a review on Trip Advisor referring to Wincanton as a major centre for UK jazz.

Andy Urquhart is a powerhouse trumpet player with chops of steel developed by many years of playing in one of the UK's army bands. Much like Bristol's Jonny Bruce he is one of those rare players equally at home playing lead in a big band or improvising in a small group setting. Andy has for many years run the house band at the Jazz Cafe, Sandbanks [near Poole], in which role he has worked alongside most of the UK's best known jazz artists as visiting guests.

Phil Doyle is a former forces musician and works with the famous Joe Loss Orchestra. Known as one of the best jazz pianists working along the south coast, he has accompanied visiting US artists such as Bobby Shew and Scott Hamilton.

The central members of SoBN are tonight joined by the Bristol rhythm team of Chris Jones and Andy Hague. 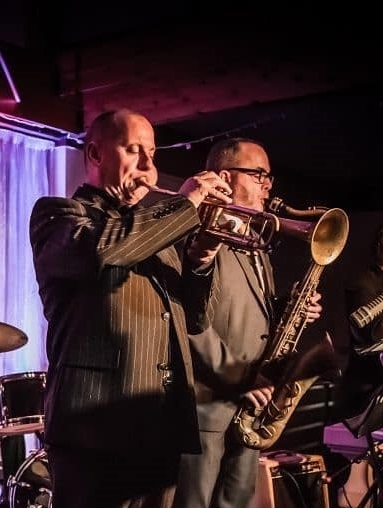