Ticket reservations by email at

This tour brings together the furious sound of Alan Wilkinson (saxophone/bass clarinet) and Andrew Cheetham (drums) for the first time since recording together in April. It is a meeting between a stalwart of the UK improvising scene in Wilkinson and one part of a younger generation of improvisers developing in Manchester’s fertile outsider scene. The music will undoubtedly have sustained periods of intensity as Wilkinson pushes the limits and engages with Cheetham’s propulsive stream of rhythm. Alan Wilkinson has collaborated with a huge list of improvisers, such as: Peter Brötzmann, Derek Bailey, John Edwards, Chris Corsano, Thurston Moore and many more. Andrew Cheetham is the drummer with an array of bands in Manchester, including Desmadrados Soldados de Ventura, Yerba Mansa and Irma Vep

Dominic Lash is a freely improvising double bassist and composer. A well established presence in improvised and composed music, he has performed with musicians such as Evan Parker, Tony Conrad and Joe Morris. His main projects include The Dominic Lash Quartet, The Set Ensemble and The Convergence Quartet. 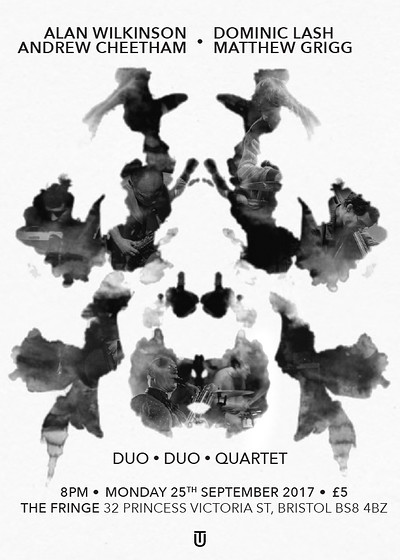