We first met in 1991, long before Mojo Hand began. Jon was already a professional guitarist with a background in the blues since the late sixties, having first been inspired by, then going on to play with, many of the artists on the London blues scene. Pete was a fourteen-year-old aspiring guitarist who had recently picked up an old dobro and was listening to rural and early electric blues, piecing together by ear how to play it. On hearing about Jon, Pete went round for lessons and a friendship ensued, with Pete joining Jon for several gigs and blues seminars.

Fast forward to August 2017 when a chance meeting brought us back together. After many years of working in music, it turned out we were both hankering after an out-and-out, undiluted blues project. Blues is our first love and our mother tongue, and it felt like time to return to simply playing what we love. We met up and decided to put a set together and go out busking, just for fun and to see what would happen. On our first busking session we got booked for a gig, and things have continued to snowball from there, beyond our expectations. We’re now doing it pretty much full-time with lots of gigging work, and with blues radio airplay and slots at three national blues festivals (Colne, Southport and Wotton) in our first year.

Mojo Hand started as street music, in the tradition of so many of the great players we admire. That’s still at the heart of what we do: we go out a few days a week travelling from town to town and supplementing our gig earnings by playing in the street where you get audiences who may never have heard blues before but just respond to the rhythms and the emotions in the music.

They’re not in town to catch a performance - they’re just going about their business – but we always end up with a crowd of people listening and dancing. That’s where we develop new material for our set, by jamming it out while working to keep a transient audience engaged.

We do our own take on songs from across the history of blues, trying to remain faithful to their essential feel while gradually letting them evolve into our own versions. We’re playing live all week long, and for us that’s how this music is meant to be heard – spontaneous, played for an audience with the hope of making them happy, helping them forget their problems, hopefully moving their spirit in some way. People kept asking us if they could buy a CD, so when we went into the studio in February we decided we’d do it completely live – no headphones, no overdubs, just the two of us and a couple of old fifties mics. We knew that would mean leaving any mistakes on there in all their glory, but it also meant we could try to capture the energy and improvised nature of a live performance. We’re currently writing our first batch of original material, and when we go into the studio later in the year to record that, we’ll do it in the same way.

We’ve received so much support from so many people. It’s been a wonderful lesson that when you do the thing you love the most, with as much passion and honesty as you can summon, that people will enjoy it and respond to it. 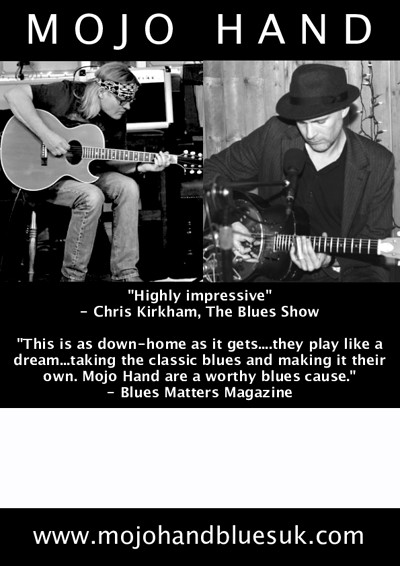