Jack Calloway & His Dance Band (soon to become Orchestra) have become nationally known and loved since their humble beginning in Bristol. Now, audiences, especially dancers, cannot get a ticket fast enough to experience their magnificent show. With a forever growing repertoire and forever growing ensemble, Jack Calloway & His Dance Band continue to take the swing and jazz scene by storm.

Beginning as a five piece they paid homage to the great bandleaders and musicians from the swing era. Now, in finding their own sound, combining it with the wonderfully orchestrated stage presence of their bandleader, Jack Calloway, they now pride themselves on being one of the best dance ensembles in the country. Soon moving into radio broadcasting, alongside regular touring, Jack Calloway hopes "... to become a major contributor to the swing movement, nationwide. Possibly becoming the new age/revivalist BBC Dance Orchestra"

"Nothing would make me happier, than to share my love of music with the entire world and have them enjoy it with me"

Over the coming months, Jack Calloway & His Dance Band will take a huge step forward into becoming 'Jack Calloway & His Dance Orchestra', still providing a sell out show to live audiences, but now broadcasting to swing lovers across the globe. Alongside this, releasing a string of singles and ep's of both old, but classic, swing tunes with his own swing compositions with his all new Orchestra.
Constantly headlining theatres, festivals, ballrooms and with the special appearances of both Jack Calloway, individually, and with his Dance Band flooding in, tickets are selling out at record pace.

"I didn't believe that we, as a dance band, were so admired and that we had such a following. I didn't believe that I, myself were so popular. But having us SELL OUT the Bristol Old Vic in under a week seemed to clarify it. Most people dream of performing such a stage, it was one of the many stages I want to perform on in my life - but I never expected, at our first ever show there, to sell out so quickly and be received so well. It is truly heartwarming to be appreciated as much as we are, merely for doing what we love"
See Less 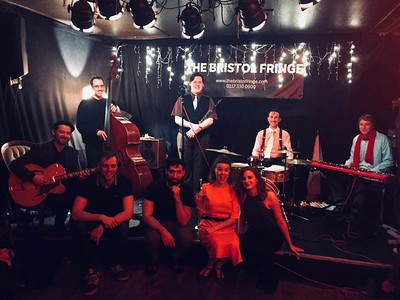