ariously described as one of the UK's most unique and versatile guitarists, Steve Payne is also feted as a talented and non-predictable singer-songwriter, multi-instrumentalist, wordsmith and story-teller whose compositions cross the musical boundaries from Blues to Folk to Contemporary Roots.
Starting out in the folk club boom of the 70's Steve appeared, recorded and played with many, and indeed most, of the musical roots innovators of that time and since. He first stepped onto the stage in 1972, appearing in various college folk clubs. His first paid performance - for the princely sum of £10 - was in the inauspicious surroundings of the Printers Devil pub in Slough in 1974.
But his emerging talents were soon in demand and he began to play guitar with Joanna Carling, who had signed to Dick James. He played on Fancy That, produced by Hugh Murphy (of Gerry Rafferty fame) and went on to play with Gerry Donaghue, Gary Herd, Dave Mattacks (Fairport Convention) and Gary Taylor (Peter Frampton).
By 1976, he was touring Europe with Loudon Wainwright III, and also found time to team up with comedian Jasper Carrott on his memorable Funky Moped tour. He featured with various other artists of the time, recording with Rosie Hardman on the Eagle Over Blue Mountain album in 1978, which was produced by Steeleye Span's Nigel Pegrum.
As punk swept the nation, Payne briefly followed suit, his new band Brent Ford and the Nylons swerving from R'n'B to punk and back again. The early eighties saw the birth of the Paynekillers, a band which evolved into the longstanding regional rock & blues favourite, The Parole Brothers. Their debut album, "When's your album coming out?" found favourable reviews. During this time Payne continued to work with other artists, most notably Dr John and blues legend B.B. King.
In 1986, he moved to L.A. and played on the West Coast scene for three years, before returning to the U.K. to form The Candy Run. The band's debut album of the same name took three years to complete, punctuated by Payne's return visit to L.A.
Back in the UK in 1989, he teamed up with well-known musician Steve Tilston and together they played Glastonbury Festival and recorded the album, "In For a Penny, In For a Pound". Candy Run toured for a year or so, before Steve began working with harmonica afficionado Keith Warmington. 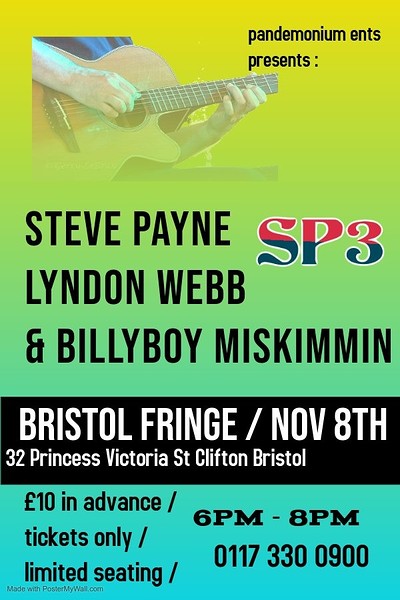