— The Canteen
Talisman bring the body and soul of roots reggae to the canteen
price: Free before 9:30pm, £5 after

For someone not into reggae, if there was ever a band that would convert me, Talisman would be that band!’ – Mr.T Lights Out Zine


Roots reggae has no finer ambassadors to come out of the south-west than Talisman. Formed in 1978, Talisman vied for the title of the country's most popular live reggae act with successful national tours, which bought them loyal fans and left behind long-lasting memories. During the late '70s and early '80s, the band's performance prowess earned them support slots with bands as diverse as Burning Spear, The Clash, and The Rolling Stones.

After the band split, historic material became the only way to hear their unique sound. The 1981 singles, and LP's“Takin' the strain' from '84 and“Jam Rock' from '90, become rare collectables. Bristol Archive Records lovingly compiled an album of Talisman's greatest early tracks, including live cuts from the band's infamous gigs and their classic Glastonbury main stage performance.

Talisman reformed in 2011 after 30 years apart on the re-release of their single on the compilation 'Dole Age – The 1981 Reggae Collection'. Back on stage and ready to rock fans once again with a fresh line up led by original member Dennison Joseph, Talisman still excel as live performers and have played festivals across Europe and the UK, including Glastonbury, One Love, and Beautiful Days. The band have released three studio albums since then, 'I-Surrection in 2013, the remix 'I-Surrection Odwah Deconstruction in 2014, and finally 'Don't Play With Fyah' in 2017, and a new album is in its finishing stages. 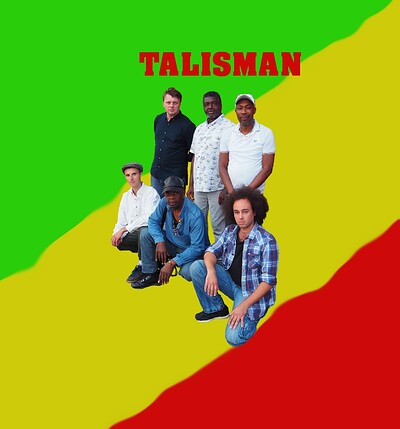