Flight Of The Giant Swan

Filmed across two weekends in November 2019, Flight Of The Giant Swan (Dir. Joe Hatt, UK, 2021, 27 mins) is a candid audio-visual testament to the raw electronic punk energy of Giant Swan, aka Robin Stewart and Harry Wright, as they embark on a UK tour in support of their self-titled debut album.

PLEASE NOTE - The film can be accessed from 8pm on Friday 5th March. You will be sent a link in advance by The Cube

Shot by the band's manager Joe Hatt (who then slowly edited the footage in the COVID-19 aftershock), the film is a woozy, visceral trip through what feels like a strangely distant time. Sequences from memorable nights in London, Glasgow, Manchester, Leeds, Newcastle and Bristol are dubbed into an uneasy churn of strobe reflections on sweat-brined limbs, room-captured blasts of live sonic vérité and post-show ruminations covertly recorded backstage.

Both an intimate portrait of the duo's onstage connection and the dancefloor communion their live sets engender, Flight Of The Giant Swan is an intense and authentic snapshot of an electrifying live act in their element, as they prepare to ascend again into a very different world.

All proceeds go to The Cube and the Music Venue Trust 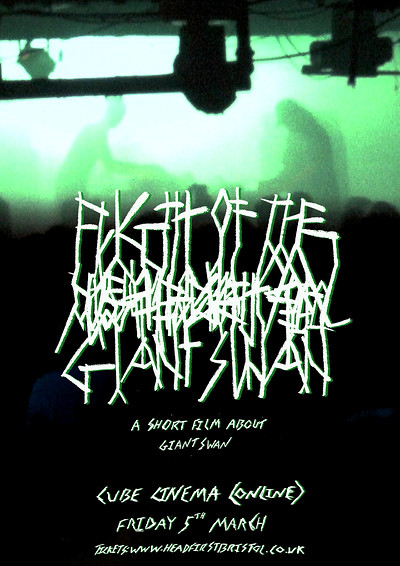