— The Cube
including screening of The Garden
price: Headfirst Tickets

You are cordially invited to celebrate the 80th birthday of seminal English filmmaker, artist, activist, diarist, and gardener Derek Jarman at the Cube. Join us for a screening of The Garden followed by a programme of short films inspired by Jarman’s work, homemade cake and the chance to design your own Jarman-inspired party hat.

Shot on Super 8 with the help of friends and collaborators, The Garden is a kaleidoscopic insight into Jarman’s inner world. Both a rich visual dreamscape and polemic against anti-gay discrimination and the indolent response to the AIDS crisis, it features a cast of religious figures against the backdrop of Prospect Cottage, Jarman’s unique coastal home. Made as Jarman grew increasingly ill, it is at once beautiful, angry, and vividly alive.

We are looking for filmmakers to create 3-5 minute films to be shown at this event. Take inspiration from the imagery of Jarman’s films…stone circles, dressed-up figures lit by flares, religious iconography, and the barren landscape of Dungeness. The films will be posted online after the event. Please email harrietcrisp0@gmail.com to take part, ideally by 20th January. Filmmakers will be chosen at random and paid £50 after we receive the film. 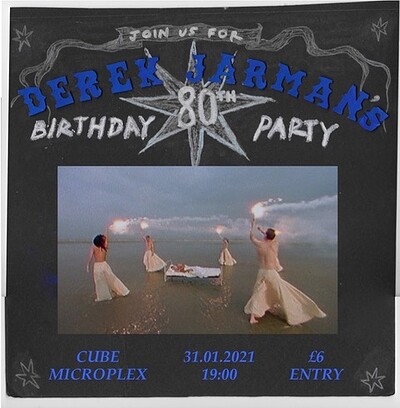