BOY HARSHER'S 'THE RUNNER' - A FILM AND SOUNDTRACK

“Nowave body horror short film from the leaders of the new coldwave renaissance. Expect icy synths, gore and mascara on screen and from DJs Kahn b2b October in the bar.”
Join the Headfirst mailinglist for recommendations.

Tonight we have a special evening of film and no-wave music. We will be screening Boy Harsher's new film, which will be followed by live music from Laughter of Saints ft. Jade Hibou and dancing in the bar with DJ's Kahn B2B October.

Boy Harsher’s fifth release is not a traditional album ⁠— it’s the musical counterpart to a short film written, produced, and directed by the duo, entitled The Runner, which will be released alongside the album in January 2022. The Runner is a horror film intercut with a meta-style “documentary” about Boy Harsher’s recording process. The soundtrack balances cinematic instrumentals with pop songs that push the boundaries of Boy Harsher’s sound. In conjunction with today’s announcement, they unveil the album’s lead single, “Tower,” and share new tour dates.

Both the film and soundtrack open with the heavy presence of “Tower.” The song is an incantation; with its pulsing synths, it’s a spell about desire and impending destruction. By the song’s climax, Matthews' pleas transform into desperate screams. "We wrote ‘Tower’ several years ago and although it's evolved over the years, its initial intent remains the same - that feeling of being enveloped, suffocated, entrapped in a relationship, which in turn manifests into reckless attack,” explains Matthews. “What you love the most can make you into a monster. And that's what this song is about, being a paralyzed fiend."

The visualiser for “Tower” comes from within the world of The Runner —presented as an exclusive session from the NUDETV program “Flesh First,” the duo performs the song in a dim warehouse with a masked drummer recorded on analog video.

Laughter of Saints formed in lockdown 3.2 from spontaneous musical moments forged in studio haven spaces, forest walks and sites of sonic beauty. A dream to not only be in but out too, with the acoustics of living wood, rocks, bird and water. Old abandoned pillboxes, tunnels and sites provide stage for speaking with the acoustic ghosts. Channeled songs of the laughing ancestors, if all goes to the plan of presence. Practicing freedom, laughter, lightness, stuckness, staying and going.

DJ's Kahn B2B October ripping it up in the bar after..

YouTube
The Runner I Official Trailer HD I Boy Harsher (2022) 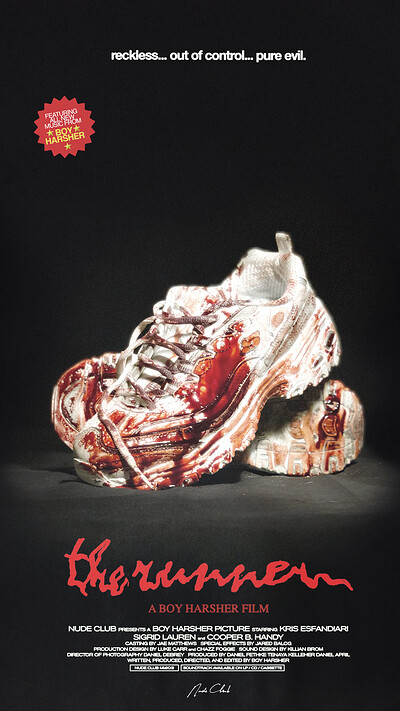