Please note: This event is sold out but still tickets available for Saturday nights talk/film show.

For the first time Bristol can bear witness to the transportive, emotional and meditational music of Lonnie Holley as he conjures up words, melodies and rhythm in the cozy confines of the cinema auditorium. With highly praised albums out on Dust-To-Digital and Jagjaguwar Lonnie has played with members of Deerhunter, Animal Collective, Dirty Projectors and people like Bon Iver, Shahzad Ismaily, Julia Holter, Jenny Hval, Daniel Lanois and Laraaji among the many who love his unique psychedelic soulful music.

“I tell a lot of people, the universe is my studio” - Lonnie Holley

Jabu is an experimental trio from Bristol, interested in exploring the intersections of soul, RnB, ambient and choral music. The group is made up of producer Amos Childs, together with vocalists Alex Rendall and Jasmine Butt and they are best known for 2017’s Sleep Heavy LP which dropped on Blackest Ever Black. Performing alongside them on the night is Daniela Dyson, a British-Afro-Colombian artist/poet, DJ. She creates vignettes of the motherland that depict myth and brujería. In her work with Jabu she is letting her walls down in an exploration of what it is to love.

Over three days and nights the prophetic and wonderfully natural and mystical Lonnie Holley is here in Bristol to make, discover and connect via song and film / talks and workshops. Two of the nights are spent at The Cube who will host a special set of shows by this compelling and spellbinding artist from the USA, who at near 70 years old is in his elemental. The weekend plans to be an uplifting resource and emotional guide through our troubling times.

Lonnie Holley is an African-American artist, art educator, and musician. His mum born twenty seven children and from the age of five, Holley worked: picking up trash at a drive-in movie theatre, washing dishes, and cooking. He lived in a whiskey house, on the state fairgrounds, and in several foster homes. His early life was chaotic. Since 1979,Holley has devoted his life to the practice of improvisational creativity. His compulsion to show up and make, born out of struggle, hardship, but perhaps more importantly, out of furious curiosity and biological necessity, has manifested itself in drawing, painting, sculpture, photography, performance, and sound. Over his time in Bristol we will witness some of this integrated art making and magic.

As a musician he improvises, records and morphs song-form into crazily beautiful shapes. Using piano, keyboards and star-guided vocalisations (lyrics both dreamily transcendental and arrestingly commonplace), his melodies and audio visions emanate authentically from a heart, soul and intellectual headspace.

MITH, his latest LP on Jagjaguwar is an impressionist piece of storytelling. His ability to move through time and space in the course of a song is something which few song-makers are capable - names like Sun Ra, Joni Mitchell, Joanna Newsom and Gil Scott-Heron come to mind. On the album Holley touches on Black Lives Matter ("I'm a Suspect"), Standing Rock ("Copying the Rock") and contemporary American politics ("I Woke Up in a Fucked-Up America"). There are two more albums to check but please etch into you mind, Lonnie doesn’t do the same song twice. The request, in this case, is simply to turn up, turn on and see what rises.

Holley’s distinctive art pieces are constructed from found materials in the oldest tradition of African American sculpture. Objects, already imbued with cultural and artistic metaphor, are combined into narrative sculptures that commemorate places, people, and events. His work is now in collections of major institutions all over the world... he is also a natural grassroots art workshop leader. During his Saturday talk at The Cube he will show images of his pieces and talk about them with his long time friend and manager Matt Arnett, whose Father had been collecting Lonnie's work since the 1980's. It was Matt who in 2010 set up show in his house which resulted in his first album being released on Dust-to-Digital, they have worked together since.

The Life and Times of Lonnie Holley, Survivor in a Fucked-Up America / VICE -https://www.vice.com/en_uk/article/d3j7aa/lonnie-holley-interview-2018

"I'm not trying to copy nobody, not trying to outdo nobody with my music," he says to me. "I'm trying to celebrate the opportunities that music allows for each individual. Because if you look back at music, music didn't need no classroom, music didn't need nobody to give it a Grade A. Music was made in the fields, it was made in some of the meanest conditions. I'm not giving you no mind, mister man, music made people get out of their sick bed." / NPR -https://www.npr.org/sections/therecord/2013/10/31/242114835/lonnie-holley-self-made-man?t=1574163482159 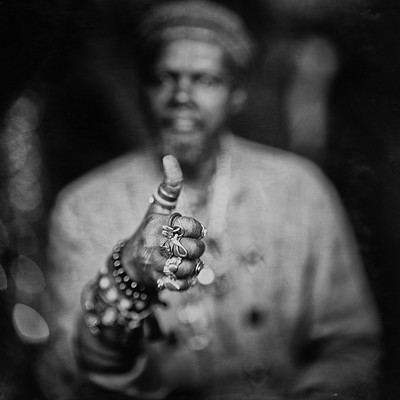