Steel Is Real But Carbon Is Quicker

— The Cube
A documentary about the UK grass-roots cycle scene and beyond
time:20:00
price: Headfirst Tickets

Steel Is Real but Carbon Is Quicker is a Bristol-produced documentary that looks at the grass roots and pioneers from which the vibrant and fast-growing British cycling scene has sprung. It celebrates the heroes who took to the road and proved that it was paved with British grit. The film features people like Colin Sturgess, the individual professional pursuit champion at the world championships in 1989; Sean Yates, winner of a Tour de France time-trial stage in 1988 and one of the early architects of Team Sky; and Phil and Grant Bayton, a father and son cycling dynasty.

Thirty years ago the idea of a Briton winning the Tour de France would have been unthinkable. But now the UK is a cycling tour de force, with sporting giants like Chris Froome, Laura Kenny and Mark Cavendish winning golds and topping podiums across the globe.

None of this success happened overnight. For decades the British cycling scene was one typified by hard graft and little reward. You did it for the love of the sport.

Steel Is Real but Carbon Is Quicker takes a look at the good folk who support the scene, not for glory but out of the sheer joy of the sport. Ace mechanic and bike collector Chris Weston, whose Isle of Wight home is a paradise for bike junkies. Cycling photographer John Pierce and writer William Fotheringham give their insight into a rapidly changing scene. And it is a scene. There is a distinct style and culture, a sense of discipline and rigour at the heart of cycling. The documentary explores these styles within the scene; it can be a little bit Mod, a little bit retro, a little bit continental, a little bit avant-garde. From the Eroica Britannia, a gathering of pre-90s bike nuts, to the enthusiasts who use bleeding-edge tech worth thousands of pounds to squeeze a scant tenth of a second off their best track time, we applaud and celebrate the broad depth of the sport and the pastime.

The film touches on the rich history of cycling in the UK, but its focus is to celebrate British cycling now. There are exciting days of racing at Castle Combe and the Wales National Velodrome through to hundreds of cycling clubs across the country that are out in all weathers. The film wholeheartedly embraces the 'way of the bike' with a real sense of enthusiasm. Pedal up and kick back to watch it on the big Microplex screen. 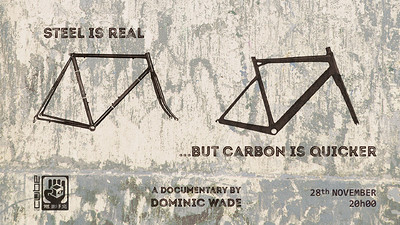