The first event of our opening weekend in the hands of Laid Blak, Bristol's awesome Urban Reggae heavyweights !

Laid Blak was brought together after producer DJ Bunjy (who has thrilled crowds on the dance floors around the world including after parties for the likes of: Kelis, Massive Attack, Public Enemy, Basement Jaxx, and Damien Marley) joined forces with MC Joe Peng (who travelled Europe with Smith and Mighty and was a regular at all rave events such as Universe, Fantasia and Dreamscape) to conquer the 90’s jungle and rave scenes. The duo’s musical direction took a course that has led them to seek out some of Bristol’s finest musicians: Flex on vocals, Lui the bass player, Stacy on drums, Tim the guitarist, Sam on keys and Tita a vocalist. What started as a studio project evolved into this acclaimed live act - Laid Blak.

Their first 12” record “Scream and Shout” went bouncing up the playlists on BBC 1 Xtra, Kiss FM and Choice FM. More recently released was the Chasing Shadows remix of ‘Red’, with over 2,031,076 YouTube views, it has proved to be an obvious favourite when performed live!

Laid Blak was signed to Brown Punk Records, a new record label set up by Tricky and Chris Blackwell (who founded Island Records and introduced the world to Bob Marley). The band then released their album Red & Blak with one of Bristol’s hottest labels: Reel Me Records.

Laid Blak’s music has been described as ‘street soul’. “When Laid Blak serves up reggae it’s a dish featuring a diverse mix of flavours. Dancehall and roots nestles up to ska with a smattering of hip-hop, bhangra and soul.” The live set has roots in urban reggae and drum & bass, but touches on jazz, funk & dubstep. The ‘good vibes’ shine through in all their songs; they always steal the show at festivals with one review from ‘Brighton Noise’ noting them as ‘the ultimate festival act’.

The impeccably tight guitar partnership of Lui and Tim provides the backdrop to a skilfully structured sound where seductive Spanish chords intertwine with deep West Indian bass. Bunjy’s dj’ing is dynamic, mixing all flavours with the uplifting reggae style vocals of Joe Peng and backed up by Flex’s vociferous and charismatic repartee. Topped with the talented Sam on key`s and Stacy on drums, this brings together the formidable talents who together form Laid Blak. Together they have formed a diverse and eclectic sound that everybody can relate to, Laid Blak has the ability to get just about anybody on the dance floor! “Whether you are white or black, slim or fat, don’t worry bout that. Just make your body rock non stop” - MC Joe Peng. These guys love performing live, and their infectious enthusiasm is plain to see.

The band is tight, polished, musically diverse and completely at home playing any genre. They appeal to a vast audience range. This was particularly evident at their Unplugged gig at St George’s Bristol in 2013. The Urban Reggae Heavyweights were “quite a culture clash for a venue synonymous with restrain and serenity”, however, “the universal appeal of their music was clear to see in the carefree smiles of all ages and backgrounds, completely lost in the moment.” Said Bristol Live Magazine, Laid Blak “superseded the reverence of the imposing venue, which is an impressive feat to accomplish.

The journey so far…

Laid Blak have rocked immense crowds at countless festivals including: Glastonbury, Shambala, Jamstand, Boomtown, One Love, Bristol Harbourside, Oxjam, Ashton Court and Extreme Sports Festival to name a few. The band have been involved in many charity events, as well as putting together their own fundraisers for the likes of Kampala (African Charity), Cancer Research UK, Oxfam, Green Peace and more recently an appeal to raise funds for the Haiti Relief Aid Appeal. The long awaited debut album RED&BLAK is available on iTunes, Amazon and HMV The album also features special guest including reggae legend Tippa Irie. 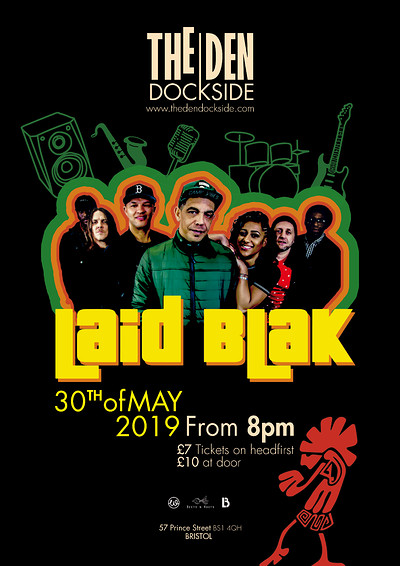