Empathy celebrates its 18th Birthday with our favourite guest from the past, Danny Howells! The last time he played for us at at Blue Mountain he literally took the roof off. He arrived in his racing green Mini and took Stuart for a spin around the block, not quite what he was expecting from a headline Dj. He was super cool and the best Dj ever to grace the Empathy decks.

A bit about Danny… Danny Howells doesn't fit into the standard dance music paradigms. With a reputation as "the DJs' DJ", he has remained stoic in the face of ever-shifting trends and fads in dance music since he broke through into the global house music consciousness in the late-'90s. He doesn't churn out productions to "remain relevant", instead only releasing music as and when inspiration strikes. He's not a publicity hungry, social media devotee. He's not someone who feels the need to reinvent himself with new monikers or side projects, nor someone who aggressively pursues a maxxed-out DJ'ing schedule. Quietly ploughing his way through the house music continuum, he has remained one of the world's most captivating selectors precisely because of these organic means. That and his impeccable selection, distinctive style and silky mixing, of course. 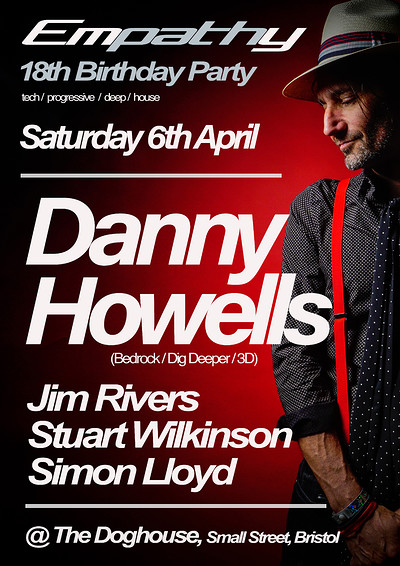