— The Globe
Our first multi-lineup event ever in Wales!
price: Tickets Below

We are over the moon to present to you our first-ever event in Wales. Cardiff is a city close to our hearts and in fact, it's pretty close to Bristol. Of course it's located in a different land, the land of lush green hills, rain, magic mushrooms and dragons. It's a truly excellent city that we are properly excited to bring our party to!

As part of their UK tour for 'First Home' (the debut album being released on 'Worm Discs' on June 2nd - produced by Tom Excell - Nubiyan Twist), we have invited this fast-rising and hugely energetic crew to come and smash up The Globe for their Wales debut.

Their music celebrates the coming together of cultures, driven by drummer Tim Cook, their shows are powerful and dynamic, exploring grooves and genres from the UK and around the world inc. Afrobeat, breakbeat, jungle, jazz and highlife. The band have played alongside afro-fusion legends K.O.G & The Zongo Brigade, Yussef Dayes & Pyjaen. Last summer they featured as the headline act as part of We Out Here’s Leeds online festival showcase, and have continued to blow the roof off a host of venues since. Summer 2022 is set to be a big one for them - the energy has to be seen to be believed!

We first spotted Polly on Netil Radio early in 2019. Her steady rise since has been impressive! A London based DJ and festival organiser (Basket Of Light), Poly brings the heat to the hips and feet with selections from South America, the Caribbean, West Africa and beyond. She is a Worldwide FM resident and can be found increasingly playing clubs and festivals across the UK and Europe, we've had so many good gigs together over the past few years it was only right to invite her along to this one!

Pamoja DJs: After meeting at a festival a while back, we knew we had to do something together! The guys at Pamoja Disco have many years of experience with deep crates of funky goodness, and a togetherness we can relate to! They will be opening the night, so make sure you get down as close to opening as possible to support and get the night swinging from the get go! Shouts to Sure Shot’s Miles, Dusty Fingers’ Chris, Groove Theory’s Tom and Afro Cluster’s Veto.

The resident Worms will be laying down their hot and heavy mix of international grooves and percussive belters to get you wriggling!

This event will be a full-on Worm Disco Club party curated with love & care given to the line-up, artwork, venue and our audience all in the name of a quality worm night out. Check out the latest of Patch D Keyes’ special posters! 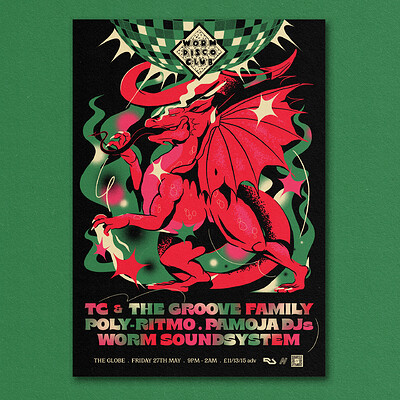