A welcome return to one of Billy in the Lowground's favourite Bristol venues - chase away the post-Christmas blues! :)

"Billy in the Lowground are a 6-piece Rock band with Folk instruments, which apparently confuses the hell out of people trying to fit them neatly into a genre... they’re often shoe-horned into the pigeonhole of ‘Folk Rock’, but the sound is continuously evolving, incorporating elements of Americana, Rock, and Country. The songs are all written by singer Chris Hibberd, who started the band (then called the Brew Band) back in 1991 with other founder member Ruth Behan on fiddle.
Comparisons are sometimes made with the Waterboys, Pogues and Levellers, but there’s a distinctive and authentic tone to the band that’s all their own.
They’ve played hundreds of gigs in pubs, clubs, and venues large and small all over the UK since they formed in 1991, as well as becoming veterans of the summer festival circuit, appearing at, amongst many others: Glastonbury, Ashton Court, Bearded Theory, Farmfestival, Off The Tracks, Sunrise Celebration, OUT West, Home Farm Festival, Lechlade Festival, Village Pump Folk Festival, Landed Festival…
They’ve supported many well-known acts on tour, including The Men They Couldn’t Hang, Norma Waterson & Martin Carthy, Oysterband, Rory McCleod, Chas & Dave, the Wurzels and Fairport Convention. "

"What makes Billy in the Lowground more accomplished than many other Folk-Rock bands is the quality of the songwriting, the exuberance of the arrangements and the skill and enthusiasm of the playing.
Ruth Behan’s fiddle has a defiantly Irish sound that roots the rest of the band and underpins the Country feel to many of Chris Hibberd’s songs. This is Nashville relocated to the wilds of Somerset and performed with Joe Strummer’s heart and soul." 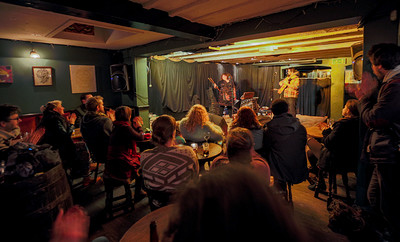