— The Hare on the Hill
Join us for the Fordsons, playing old time, mountain and early bluegrass
time:17:30
price: entry is free

Described by Big Chill festival, independent record label Cooking Vinyl and Campfire Convention founder Pete Lawrence as simply ‘excellent’ and by How The Light Gets In Festival as ‘one of the best 30 new talents in the country’, The Fordsons are building a sizeable word of mouth reputation for their entertaining and authentic old time music, and for bringing the string band and mountain sounds of Appalachia to new audiences.

Gathering around a single, central microphone the band displays all five members as a close, tight ensemble, but can also showcase individuals and different combinations of instruments to present a colourful and diverse musical palette in a programme of string band music from the early 20th century - breakdowns, fiddle and banjo tunes and cautionary songs of love and loss. ‘The content’, as scions of the old time scene, The Carter Family would say, ‘is morally good’.

The Fordsons have recently, and notably, played to appreciative crowds at The Gloucester Folk Trail festival, Abergavenny Food Festival, headlined at The Globe at Hay and featured prominently, alongside Mercury Prize nominees, at How The Light Gets In festival at Kenwood House in London, amongst other venues. 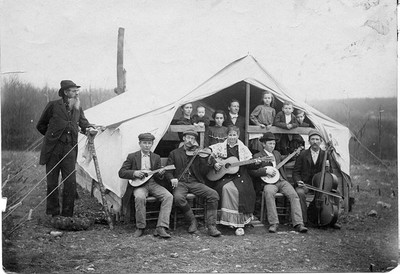