****
TO THE FANS - In the name of love and sustainability we want to give something back to you and try and spread a positive message at the same time…. so any attendee that buys a gig ticket who walks/cycles or gets the bus to the show will be
refunded £2 on their ticket price. You will need to prove it of course, just send a picture or screenshot to info@therupees.co.uk, we will then refund the £2 in the following weeks after the show. Love The Rupees


***
We are The Rupees and we are champions of the underdog.

Our principles are simple, never apologise, be distinctive, be passionate, but most importantly don’t let being an underdog ever hold you back. We play rock n roll and we play it our way, we play it differently, we play it to escape and we play it for the underdogs.

Born from writing songs on lunch breaks, huddled in a white van on many cold and wet building sites, with no money and a lack of opportunities Ryan moved to Bristol where he met Seamus, Tom and Ed. Idolising the great working class bands like The Prodigy, Oasis, Kasabian and The Clash, an unapologetic amalgamation of snarling curt vocals and a nuclear wave of distorted synths and guitars were firmly established. It’s rock n roll, just different.

The Rupees and their music has been showcased on BBC Radio 1 (Huw Stephens), BBC Radio 6 (Steve Lamacq), and Sky Sports (Soccer AM). Having played Reading Festival, Glastonbury and Bristol Harbourfest, supporting bands such as Blossoms and The Growlers and selling out numerous headline shows, The Rupees are making a serious racket that is becoming hard to ignore.

Having just completed their 2019 tour, the 2020 UNDERDOG Tour is penned in and having just left the studio their arsenal is full with four singles ready to attack the UK public in 2020 and with further studio time planned it seems the assault is set to continue.

INDIE BUDDIE - ‘Blinding synth rock to have you compelled to dance mindlessly to its thundering upbeat thrill.’

For songwriter Ryan Tucker, the meaning behind The Rupees music is simple - ‘No messing about and nothing plastic, we’re making music that is going to give you energy, make you move, sing, and lose yourself in. Escape the 9-5, escape everything for a while and be somewhere better’. 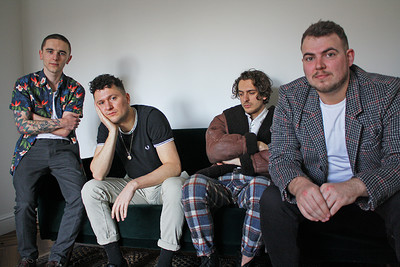