18+ event.
--
Formed in 2017 by brothers Thomas (vocals/guitar) and Mark Harfield (drums) – the three-piece’s line-up minted soon after by the addition of bassist and Tom’s old school friend Simon Keet – GLOO, it’s important to understand, are not in the business of serious rock’n’roll. No, that can be left to the po-faced for whom being in a band seems more chore than enjoyment. Being raised on listening to AC/DC in your dad’s car will shape your view of music in such a way. Growing up in a place such as Littlehampton, a faded seaside town on England’s south coast 20 miles east of Brighton and a world away from London’s bright lights, instils a certain appreciation for life’s simple things. But if we’re not here for a long time, we might as well have a good time,
right?

GLOO’s debut album ‘A Pathetic Youth’ and subsequent ‘Stop And Stare’ EP laid down the musical blueprint for the band, echoing the likes of Nirvana, Dinosaur Jr, Husker Du and Sugar – three-pieces who similarly preached of the power in the purity of when guitar, bass and drums collide – and earned support from the likes of Spotify, Radio 1 (Dan P. Carter, Jack Saunders and Huw Stephens) and Kerrang!. The band’s high-octane live shows, meanwhile, won fans the old-fashioned way via support slots with Press Club, Queen Kwong and Demob Happy, and appearances at festivals including 2000Trees and The Great Escape.The lessons learned during those years have all coalesced into shaping not only How Not To Be Happy’s sound – a more melodic, looser, slacker GLOO – but also its spirit. 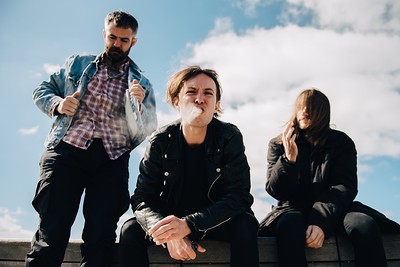